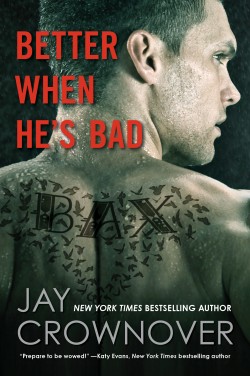 “They [Bax and Dovie] can sure burn off the pages with steam and heat.” ~ Under the Covers

Shane Baxter is a bad boy. Not just the type that has tattoos and a bad attitude.  He’s from the wrong side of town, has had a rough life of survival, was always good at it until one mistake and he just got out of jail.  He doesn’t want to go back to working for his old boss.  After all he trying to get out then.  But he’s forced to stay involved when he’s put in the middle of looking for his best friend, Race.  His dear friend, who betrayed him and sent him to jail.

In his search for Race he finds his sister, Dovie.  She’s also been looking for Race and won’t take no for an answer on working together.

So I liked Bax a lot.  He’s ruthless, he’s passionate, he’s real.  He doesn’t justify his actions, he speaks the truth, says what he meand and does what he wants.  But he’s also the good type of bad boy.  That’s not the life he wants for himself, but it’s the only one he was able to provide for himself with.  He’s the type that wants to be able to have a good girl at his side instead of the strippers but doesn’t think that will ever be an option.  Then Dovie steps in.  She’s good, but not that innocent.  She’s grown up in the streets herself and has had to make the best of what she had.

Their relationship has a nice build up.  Their chemistry was definitely a presence whether in sexual tension or consummation.  They work very well in day to day situations, they get to know each other and complement one another well.  They can sure burn off the pages with steam and heat.  I enjoyed every second!

This was another very enjoyable read coming from Jay Crownover and it definitely leaves me wanting to know more about The Point!  With just the right amount of suspense and even some action. 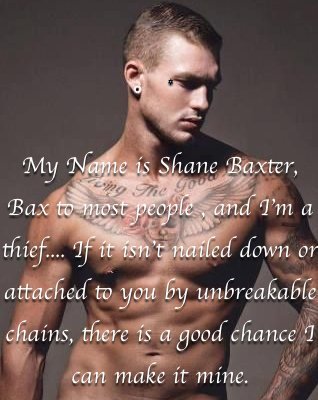 There’s a difference between a bad boy and a boy who’s bad . . . meet Shane Baxter.

Sexy, dark, and dangerous, Bax isn’t just from the wrong side of the tracks, he is the wrong side of the tracks. A criminal, a thug, and a brawler, he’s the master of bad choices, until one such choice landed him in prison for five years. Now Bax is out and looking for answers, and he doesn’t care what he has to do or who he has to hurt to get them. But there’s a new player in the game, and she’s much too innocent, much too soft…and standing directly in his way.

Dovie Pryce knows all about living a hard life and the tough choices that come with it. She’s always tried to be good, tried to help others, and tried not to let the darkness pull her down. But the streets are fighting back, things have gone from bad to worse, and the only person who can help her is the scariest, sexiest, most complicated ex-con The Point has ever produced.

Bax terrifies her, awakening feelings she never thought she’d have for a guy like him. But it doesn’t take Dovie long to realize . . . some boys are just better when they’re bad. 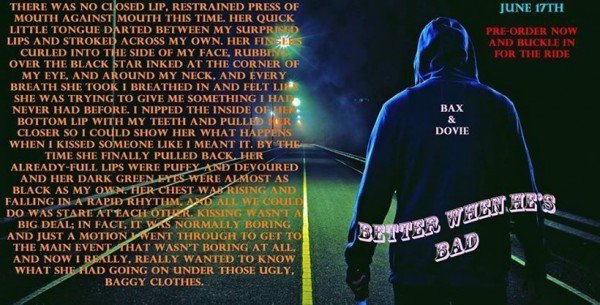 I have only read one book from Jay Crownover (Rule) and loved it. Can’t wait to read the others in series. I also can’t wait to read this series. I don’t really like to read reviews because sometimes people put to much in a review. They pretty much tell you the whole book. So this was a perfect review to me. And to answer the question on what I like when I read about bad boy? You pretty much say it in your review. I like “The good type of bad boys.” Thanks.

Under the Covers Book Blog
Admin
Reply to  Maritza Robinson

Thanks Maritza! I try not to give away what happens throughout the whole story because what would be the point of reading the book then? LOL I think you will enjoy this book 🙂

Under the Covers Book Blog
Admin
Reply to  DENISE SMITH

Hope you get to read it soon!

Love her books. The bad boys intense love for their woman.

Under the Covers Book Blog
Admin
Reply to  Nancy H

That is definitely part of their appeal!

i like bad boys, but i like more when the bad boys are so fucking adorable haha thanks for the chance :

I absolutely love the heroine’s name Dovie! It’s so different and it sounds like it fits her perfectly. Bax is a yummy, tattooed, touch and sexy bad boy, but I think Dovie will make help him realize his heart has a gooey center! I do have one personal question for you, Jay. At what age did you get your first tat and what was it? This book will be added to my TBR list!

I always love reading bad boys when he’s taunting or even make fun of the girl he likes just because he won’t admit that he likes her. But when he cross the line and actually hurt her feeling, he will beg and beg until she forgive her. It’s very fun to read! 😀