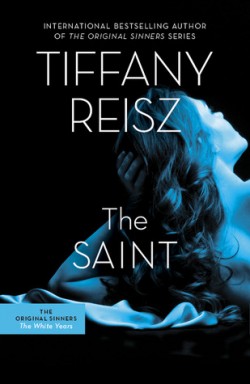 The Saint
by Tiffany Reisz

In an unforgettable story of first and everlasting love, Tiffany Reisz becomes a master at lyrical words. THE SAINT is not simply my favourite of the series, but also a possible contender of my favourite book of the year.~ Under the Covers

THE SAINT is book five in the Original Sinners series, but it is the first in what is called the White Years, the time when Nora still went by the name of Eleanor and was a sixteen year old Catholic school girl.

It is at this time where she learns that she has a new priest named Father Soren Stearns. The man immediately appeals to her. With his Ducati and his blonde hair, Soren is the hottest priest ever known to man. I came across this quote while reading and I thought it perfectly summed up how Eleanor felt about Soren:

“If God looked like Soren there would be no atheists.”

From the first moment they met, Eleanor worships him. However, that doesn’t mean she is a docile creature. She’s far from it. Soren and Eleanor’s interactions are like a cat and mouse game. They torture one another, taking pleasure in seeing the other suffer. While Soren holds himself back, Eleanor pushes just to see what reaction she can get from him. I found every page to be entertaining, right now to the dialogue.

This is where I think Tiffany Reisz excels at. All her books have this bouncy dialogue that maintains its beat throughout the book. However, I never thought that would be more true than in this book. Soren and Eleanor interact in a special way. Despite displaying their age differences, Reisz makes it work so well that I found myself grinning at a lot of the lines they say.

Another skill that Reisz displays in her writing is through the use of Nico, Kingsley’s son. At first, I wondered why she was starting the book off with Nora’s scenes with Nico. However, as you read on, you can see that Reisz clearly has a plan. She uses the frame narrative where Nora is telling Nico the stories of her past as they lounge around in each other’s arms. It would be so simple to just have THE SAINT be a flashback book. But the fact that she tried to make it a story within a story made me love this book even more.

I find it unbelievable how Reisz can put Nora is anyone – and I mean ANYONE – and make their time together feel special. She is so good at evoking emotions with her sex scenes, making it not just about the kink – although there is that!- and makes it about love too. How does she do this time and time again? It’s insane!

l admit, Soren was a character that I loved reading about, but he scared me. But after reading this book, seeing his interactions with Eleanor, I can’t find a single thing I don’t love about him. It’s like what Eleanor said about Soren taking her virginity. It’s not enough for him to take it, he had to obliterate it. THE SAINT has obliterated my love for the other books in the series. I thought I loved them, but Soren came along on his Ducati and has consumed my mind.

I should note that the books should be read in order. Much of Soren’s past is revealed in this book. However, if you want the full experience, start with THE SIREN.

In an unforgettable story of first and everlasting love, Tiffany Reisz becomes a master at lyrical words. THE SAINT is not simply my favourite of the series, but also a possible contender of my favourite book of the year.

The Saint by Tiffany Reisz US Blog Tour | The Novel Tease

Wow! What a great review….thanks annie

Great review! Can’t wait to get my copy tomorrow!