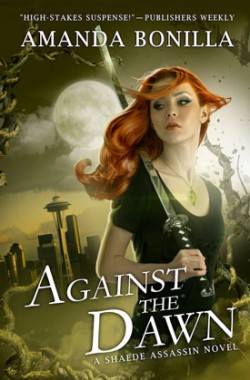 Against the Dawn
by Amanda Bonilla

“I have to admire the way Bonilla pours emotions into her characters. They make mistakes and they can be selfish and blind at times as well, but that only makes them more appealing in my eyes. It’s interesting to watch how they will come out in top.” ~ Under the Covers

In the fourth instalment to the Shaede Assassin series, we find Darian returning to Seattle after her visits Brakae, Raif’s daughter in O Anel. After two weeks there, she discovers that six months have passed in the real world and many things have changed since she left.

First and foremost, she learns that Xander is barely controlling his kingdom. In an effort to fix that, he wants Darian as his queen. However, as you know if you’ve followed the series so far, Darian and Xander share a special relationship that isn’t necessarily sexual. While Xander tries to convince her of that anyways, I don’t really think either one of them want it. Xander sees Darian as a powerful tool, something to possess and he is a man who will do anything in order to obtain that power. On the other end, the last thing Darian needs is someone trying to use her abilities and brain in a way to benefit themselves.

Things with Tyler remain strained. After deciding that he doesn’t want to stand around and watch as Darian puts herself in danger time and time again, Tyler walks away and that causes immense heartbreak for Darian. However, I have to admire the way Bonilla pours emotions into her characters. They make mistakes and they can be selfish and blind at times as well, but that only makes them more appealing in my eyes. It’s interesting to watch how they will come out in top.

Raif is the standout character for me. Every time he was in a scene, it just made me smile. I like what he is for Darian and what he does for the series as whole.

While the ending does leave room for more unanswered questions, Bonilla creates a fun-filled rollercoaster ride for readers to enjoy.

Amanda Bonilla lives in rural Idaho with her husband and two kids. She’s a part-time pet wrangler, a full-time sun worshipper, and only goes out into the cold when coerced. When she’s not writing she’s either reading or talking about her favorite books.

I have shaedes of gray on my tbr pile….thanks annie