Join our newsletter to be the first to hear our latest news! Learn More
Home / Reviews / Review: Born of Night by Sherrilyn Kenyon 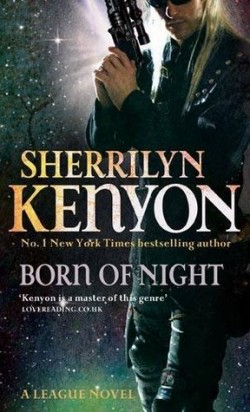 Born of Night
by Sherrilyn Kenyon

Princess Kiara has once again been kidnapped, only it looks like she may not survive it this time. The last thing she expects is to be saved by the infamous Nemesis, an assassin reputed to be cold and ruthless and the only assassin to have ever quit The League, the corrupt organisation that governs the universe, and continue breathing. Nemesis has vowed to protect the innocent now that the League no longer has him on a leash, but the feelings he has for Kiara are far from innocent and she soothes him in a way his tortured past has never experienced.

Until I read Born of Night I have never been a fan of Sherrilyn Kenyon, I find her tendency to inflict torturous pasts on nearly every single character she has ever written a little disturbing and melodramatic. However, for some reason if her poor characters are floating around in space apparently I will enjoy it.

I confess I do love a romance sci-fi, all those alien wibbling their bits about, love it! But Born of Night wasn’t my typical corny sci fi romance, it has started to build an interesting universe with characters and races I can’t wait to hear more about and with a ruthless and corrupt organisation, The League, that I can’t wait to see be torn down.

As for the romance, it was all sweet and sexy, Nykiarrian and Kiara were a lovely couple, who both needed one another. As typical with a book penned by Sherrilyn Kenyon, both characters had their horrific pasts to contend, especially Nyk, but although I have read that kind of thing before, I still enjoyed reading as love conquered all! As for Nyk, he has made it straight in to my harem, something about that long blonde hair and green eyes rawr *claws air*.

This is basically Dark Hunters in Space, but instead of paranormal warriors and gods we have aliens and space ships, now I am not a fan of the former, but I love the latter. I highly recommend giving this book a try even if you don’t normally read sci-fi, if you enjoy romance, especially of the Sherrilyn Kenyon variety, then you will love this.

OMG I love her writing and this series is amazing!….absolutely LOVE nykyrian

Sounds great! I want to find out more about The League!

Review: Born of Legend by Sherrilyn Kenyon – Under the Covers Book Blog

[…] this is a series you need to read in order, so check out my review of the first book instead Born of Night. […]