Hi Vicki and welcome back to Under the Covers!

THE GIVEN is the third book in the Celestial Blues series. What can readers expect from this latest installment?

THE GIVEN isn’t just the third book, it’s the last in the trilogy, so we’re finally going to find out the question that’s been driving the story from the first chapter: Who killed our agent/PI hero, Griffin Shaw, fifty years ago?

However, just as important, at least to some readers, is the relationship between Grif and his modern-day partner/love, Kit Craig. Though torn apart by events at the end of the last book, The Lost, they are compelled to work together once more in order to find a woman who ends up leading them through fifty years of entanglements and back into the life-threatening dangers they so narrowly avoided before.

How would you say Grif’s development over the series differs from Kit’s journey?

Although Kit and Grif are joined at the hip for much of the series, they view events in entirely different ways, not only because of their respective sexes and professions (PI vs. reporter) but because they come from very different eras. Kit is a rockabilly enthusiast – enamored by anything from the 50’s, which is Grif’s true time and place – but she is very much a modern-day woman. She knows what she wants and goes after it. Grif does as well, but his actions are driven by his mid-century sensibilities. This both draws them together, and tears them apart.

Which character do you have the most fun writing and why?

I have great fun writing the side characters, even the antagonists, and I have to find something compelling about each of them if I’m to include them in the story, but I have a passionate love for both my protagonists. Those are the people I follow around book after book, and I become more attached to them with each installment. By the end of a series like this one, I think of them as real people and friends.

I love the Rockabilly lifestyle you depict in the books and how you perfectly mix it with our hero, who is forever stuck in that era which is when he died.  How did this idea come to be and what do you think it adds to the feel of the series as a whole?

I have a great love for crime and detective fiction and I’ve wanted to write a PI/gumshoe story for a long time. Griffin Shaw was with me first, and my big ‘What if…?’ was the idea of a man driven to solve his own murder. Yet I couldn’t figure out how to make it pulpy, yet relevant and gritty and modern until Kit Craig showed up, and it was her enthusiasm for the rockabilly lifestyle that tied them together. It provides both connection and conflict, as well as moments of levity, and I loved watching them work out their differences while fighting crime.

The world you have created is vivid and detailed. How do you keep track of all the details in the series?

Badly. I’m terrible at it and usually end up combing through drafts to rework and reorder my timelines especially. I’m marginally better with the Celestial Blues series than I was with my first, but that’s only because I made a series bible up front and then added to it as I wrote. Still, I spend most of my time tangled up in my mental underwear. It’s messy and not a great way to work, and the only way to overcome it is to take the time to go over it again and again, draft after draft.

You have the most stunning covers! What are your thoughts every time you see a new cover of yours? Which one is your favorite?

These are definitely the best covers I’ve ever had, and I am gobsmacked every single time I see one. Yet it’s no accident. I asked for Larry Rostant to be my cover artist when I sold the series, and my editor was able to book him for all three well in advance. We were able to choose the models that way too. She and I then went through images to determine clothing choices and body language, we picked out the monochrome backgrounds and the color and style of Kit’s dresses. I just knew that branding the series was important, as was letting readers know that this was a tight trilogy – that it was both paranormal and noir – and we wanted to give them a beautiful package at the series conclusion.

For aspiring authors, what’s your one important word of advice?

It’s so easy these days to focus on market or sales or what Writer X is doing, and how much money they’re making … but focus on your craft, continue learning, apply yourself and move forward in that way, daily, and the rest will come. You only become a better writer by writing. Not rewriting. Not talking about writing. Not thinking about it. So make sure you’re in love with the work and not just the thought of the work. And then do it. Also, read good books.

What other projects can we expect from you?

I have a straight thriller completed and out to market now and I’ve started some new worldbuilding, which means that I’m working hard on the next series bible now and trying to keep a little more organized this time. Please cross your fingers for me!

New York Times bestselling author Vicki Pettersson continues her breakout new supernatural noir mystery series as a fallen angel and a reporter team up to stop a drug cartelAfter learning his wife survived the attack that killed him fifty years earlier, angel/PI Griffin Shaw is determined to find Evelyn Shaw, no matter the cost. Yet his obsession comes at a price. Grif has had to give up his burgeoning love for reporter Katherine “Kit” Craig, the woman who made life worth living again, and dedicate himself to finding one he no longer knows.Yet when Grif is attacked again, it becomes clear that there are forces in both the mortal and heavenly realm who’d rather see him dead than unearth the well-buried secrets of his past. If he’s to survive his second go-round on the Surface, Grif will have to convince Kit to reunite with him professionally, and help uncover decades of police corruption, risking both their lives… and testing the limits to what one angel is really willing to give for love.

BUY “THE GIVEN” NOW 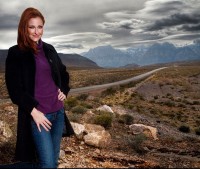 I am a Las Vegas native who has always loved to read and write, yet a brief post-college stint in public relations convinced me that “working on assignment” was not the career for me. So I did what any self-respecting Vegas girl would do: I became a showgirl by night … and a closet novelist by day.

A decade later I became an “instant bestseller” with my Signs of the Zodiac fantasy series featuring reluctant superhero, Joanna Archer. The Celestial Blues para-noir trilogy – about a 1950’s PI-turned-angel unwillingly dumped into the 21st century – quickly followed, and I recently finished work on a stand-alone psychological thriller.

Though I write both paranormal and straight thrillers, the tie that binds my work together is my insistence and love for strong female characters, and with ten novels behind me I can now look back and clearly see that my passion – no, my obsession – is writing about what it means to be a woman in this man’s world. How we choose to move through it. How we define and present ourselves in it. How we prepare our daughters to do the same.

Of course, there are countless ways to answer this question, and my protagonists in my first two series – Joanna Archer and Kit Craig – do so in very different ways. Yet whether their strength is primarily physical or mental, the one thing all my female protagonists share is a willingness to face their respectively dark and dangerous worlds head-on. I love that, and so I continue to write about women who defy the odds, women who refuse to be silenced or stopped. I write the women who simply won’t be written off.

Great advice. Also, I like the idea of a series bible.