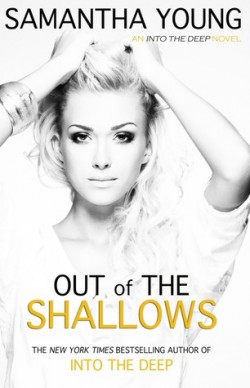 Out of the Shallows
by Samantha Young

Young pens such charismatic and endearing characters that readers can’t help but fall in love with every time.  ~ Under the Covers

OUT OF THE SHALLOWS, the second in the Into the Deep series must be read after the first book in the series. Young doesn’t waste time rehashing over previous events, but dives straight into the action, picking up somewhere where the last book ended off (you’ll see what I mean when you read it) and dealing with the consequences of the actions that Jake and Charley have made.

As you will know if you’ve read the first book in the series, the romance between Jake and Charley is complicated. They have been torn apart before but those feelings still linger. In this book, Young once again employs the technique of jumping forward and backward in time with each chapter. While this took awhile for me to get used to and worked in the first book, I felt that it was a little harder to fall in line with it in this book. I think this is mainly because in the first book, there’s a big different between the events from when Jake and Charley were younger and what was happening now.

With this book, the events that were taking place weren’t occurring too far apart. Just when I was hooked on a scene and wanted more, it switched back to the past and as a result, it stalled the pacing of the book a little bit.

OUT OF THE SHALLOWS has some major things happening in it that concern the secondary characters. I was very interested in Beck’s character particularly. Young spends quite a lot of time building up Beck’s character and Claudia so I’m wondering if she’ll do a spin off or perhaps continue the series with their story if that works out.

And what about Lowe? He was another character that sparked a lot of interest. I wouldn’t mind reading more about his character either.

Jake and Charley have their own issues they need to sort out. Like I said, the cuts between the chapters can make it hard to keep track of the sequences of events, but if you’ve read the first book, then it should make more sense that way.

I love Jake. I find that although he makes his mistakes, he is more than willing to make up for them. One other thing that was interesting was Charley’s relationship with her family. It becomes a major conflict in this story and since Charley’s father doesn’t like Jake, he has more than one person he has to convince if he wants to be with Charley.

The sex scenes are always very steamy when Samantha Young pens them. But I thought that the author seemed more comfortable with the scenes in this book. All the sex scenes seemed to come organically and didn’t come across as forced. It was sexy without be contrived and I think that makes a huge difference in the romance between Jake and Charley as well.

OUT OF THE SHALLOWS concludes Jake and Charley’s romance in a satisfying way. Yet there is more than one avenue open for Samantha Young has yet to explore. I’m hoping for stories for Claud, Lowe or Beck in the future because Young pens such charismatic and endearing characters that readers can’t help but fall in love with every time.

this series is on my tbr…thanks annie

Thanks for the review, I still have book 1 in this series sitting in my kindle TBR pile.

I love Samantha Young! I can’t wait to start this series!!

Under the Covers Book Blog
Admin
Reply to  Diana Doan

If you like NA, then this one will be fun for you to read!