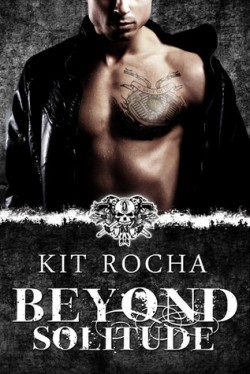 Beyond Solitude
by Kit Rocha

While Rocha’s band of hunks are all badasses, I think the key thing about their heroes is that they aren’t all metal and bullets. They care a whole lot about each other and the women they consider theirs. For me, that’s what makes these heroes as delicious as they are. ~ Under the Covers

BEYOND SOLITUDE falls after Beyond Jealousy but takes place outside of the main series plotline. For readers who have wanted to try the series but don’t really know if this is for them yet, then I suggest trying this short story because it encompasses all that the Beyond series is about, but you won’t be confused by the events.

Derek Ford had been in a motorcycle accident that caused him to break his leg. He travelled back to Sector Four, alone while injured and although many respect him in the O’Kanes, Ford still believes himself to be damaged and weak.

When Lex hires Mia to work for Ford, we see a side of Mia that is strong, independent and hardworking. Although her living conditions are less than stellar and she is now working for the reputable O’Kanes, Mia doesn’t want to take what isn’t hers. She wants to be able to earn it and I think that makes her very admirable in my eyes.

Though fairly short, Kit Rocha manages to encompass the unique world, the smoking hot sex and also the deep emotionally yearning that both characters have. Ford is a little grumpy, which makes him extremely sexy and desirable. Paired that with the way he looks out for Mia and Rocha has made the perfect man. While Rocha’s band of hunks are all badasses, I think the key thing about their heroes is that they aren’t all metal and bullets. They care a whole lot about each other and the women they consider theirs. For me, that’s what makes these heroes as delicious as they are.

I love this series!!

I really enjoyed this book

I know everyone talks about how great these books are but I’ve never been in to stores about bands :/

Bands? You mean, rock stars, Elizabeth? if so, this series follows a gang I guess you can call them in a dystopian world. It’s quite unique!

I worship at Kit Rocha’s feet. I don’t read urban fantasy at all but I read theirs. *faints*

I love Kit Rocha’s books. Their erotics are amongst my faves!

UTC introduced me to this series and I am addicted. I can’t remember the last time I finished a story and then re-read it again immediately. Kit Rocha Rocks!

Under the Covers Book Blog
Admin
Reply to  Barb

YEAH, BABY! That’s so awesome to hear, Barb! Now we can totally gush about how hot these heroes are together 😛