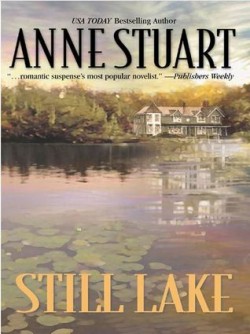 This was a good read, it didn’t rock my world, but it had enough suspense, sexy times and romance to make me enjoy it. ~ Under the Covers

Sophie Davis has bought her dream property and plans to convert it into a bed and breakfast. Its idyllic setting besides the lake is perfect and just what Sophie has always wanted. However, the same lake was also the sight a gruesome triple murder 20 years before. Thomas Griffin was arrested for the murders when he was a teenager and then later acquitted, if only he knew whether or not he actually committed them, the whole night is a blank in his memory. He has returned to the lake, disguised as the respectable John Smith to discover if he really did commit the murders, or if someone else framed him. This was a good read, it didn’t rock my world, but it had enough suspense, sexy times and romance to make me enjoy it. But although I did enjoy Still Lake I am glad this wasn’t the first book I read by Anne Stuart as it hasn’t left me in a rush to read anything else by her. Which would be a mistake as I have read some fantastic books by Anne Stuart, especially her historicals.But, this did have her trademark bad boy hero who at first seems cold and ruthless, but you soon find yourself falling for anyways. Anne Stuart excels at writing about the kind of boys your mama warned you about. Her heroine Sophie seemed to be his polar opposite, soft and caring, but still stubborn and strong. Something that Thomas/John can’t seem to resist. .Sophie and Thomas were by far the best thing about the book. Their chemistry was sizzling hot, even though their relationship especially at the beginning was fairly hostile, they had an undeniable attraction, that neither character wanted, but couldn’t seem to help. Unfortunately, the suspense element of the book wasn’t quite as good, although a few red herrings were thrown out, I had guessed the culprit pretty early in the book and wasn’t wrong. A good read, even if it was predictable, but if you are looking for a steamy romance and aren’t too concerned about guessing whodunit, it is worth picking up and giving it a try.

Under the Covers Book Blog
Reply to  Elizabeth P

Yes, I would start with her Wicked House of Rohan series, I love it! One of my favourite historical series and packed full of delicious bad boys!