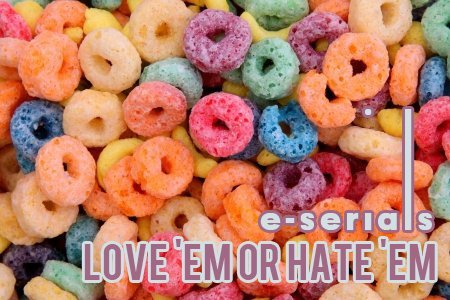 With the growing amount of e-serials flooding the market, and our own experiences with them, we wanted to bring up the issue and share our thoughts about this popular segment of ebooks today.  We would love to hear what you think about this in the comments!

As the world’s most impatient reader, I will have to say that I’m not overly fond of e-serials. I don’t like having to wait very long periods of time just to read what happens next. A week is a very long time to wait for a reviewer because I tend to go through books quite quickly. If the story is chopped up into too many instalments, then the books I read in between often wash out the experience and usually changes how I would feel about the books if I read them all in order, at once.

There have been a few serials that I’ve enjoyed though. Roni Loren’s Not Until You is a fairly long one, but I had the pleasure of reading them all at once and I think that ultimately influenced how much I enjoyed the story.

Ruthie Knox’s Roman Holiday is another long serial that I’m reading as they release. While I do enjoy it, once again, much of the events are starting to blur together as more time passes between the release of instalments.

Another factor that I think is important when dealing with e-serials is the number of instalments in the series. If the story is cut up into ten parts, I will usually wait until all the instalments are out before I read. However, if they are shorter, such as Kresley Cole’s The Professional which was made up of only three parts, I’m way more likely to dive in, knowing that the end isn’t too far away.

So while e-serials aren’t my favourite stories to read, I don’t rule them out completely. I’m just more careful about which ones I pick up because I know that that works best for me as a reader.

Serials…better left for the breakfast table. If I wanted something where I had to stop and wait every few weeks for a couple of new chapters I would pick up a comic or graphic novel, at least that way I get some pretty pictures in to the bargain. In my mind serials are the proverbial cock tease, you think you are about to get somewhere, something exciting and pulse pounding is about to happen and then BAM the little tease pulls away and you have to wait a few weeks to coax her back. Not. Fair. But like any good tease, it won’t stop me from coming back if you the goods are promising enough, for example, Kresley Cole’s The Professional and Meljean Brook The Kraken King, I just really hope this fad ends soon so I don’t expire from frustration.

I’m going to be honest; I have not had a chance to fully experience e-serial books.  I attempted before by a favorite author but after having to wait for the second episode, I just didn’t have the patience to keep going.  So, I did what any sane reader would do..…I waited until the whole serial was released.  It killed me that I had to wait for the next chapters and even more, it felt like the author could use the next chapters for ransom.  This particular author though was good to release the episode fairly quick.  Nevertheless, I opted for the finished product. I think the wait could have dampened my opinion on the book from just pure frustration.  I ended up loving the book, so it was a good decision on my end.  Bottom line, I don’t forsake e-serials per se, but I avoid it like plague.

I have this strange relationship with e-serials.  First is the fact that I TRY not to pick them up.  Generally, the reason why is that I know I’m not good at following through to read through the end.  Unless they have less parts.  But then an author I love will come out with one and I feel compelled to read it.  And even if the story is amazing, I still have had problems finishing them if they go on for too many parts.  I’m much more likely to finish one that is 5 parts of less.

My first serial was Beth Kery’s Because You Are Mine.  I actually enjoyed each part and I was purchasing them as they were released and reading that same day.  But as much as I enjoyed it somewhere along the line I stopped reading them.  I had them all on order so I have them all, but I never finished.  Then when her next serial came out, When I’m With You, which is a spin off from the first one, I only got two parts in and stopped.  Are the stories bad?  No.  Was I interested?  Yes.  But ultimately, I gave up on it.

The same thing happened for me with author Roni Loren, and this is part of a series I love and follow.  Not Until You came out and I read maybe half.  I am dying to know what happens next, I have all the parts.  I gave up again.  And this one bothers me because I actually love the author and the series, so I’m missing out on a story that I know I would ultimately love ’til the end.

But in general, I think this trend should start dying out.  Just put the whole book together and sell it as a regular novel!  I can’t count the amounts of times a “part” has left me dissatisfied but then the next part I get where the story was going.  Why break it up then and leave a bad taste in my mouth?  A more recent example of that is Every Part of You by Megan Hart.  I actually did finish the whole serial (it’s a short one) but I have mixed feelings about the story.  When I step back and look at it as a whole, I think I would’ve enjoyed it a lot more than now that I got it by parts.  I couldn’t connect.

Then there are some serials I’ve read that I considered were pretty good and kept me interested.  Logan Belle’s Miss Chatterley and Jamie Brenner’s The Gin Lovers.  Those two actually kept my interest, showcased a great story and I was able to finish them and connect at the same time.  They are a bit shorter so that definitely helped.  But ultimately, I think they would’ve been great as a full novel (which you can now purchase with Gin Lovers).

There is only one serial that I can say was amazing, written perfectly, ending in to-die-for cliffhangers and had pretty good length to each part.  That is Kresley Cole’s THE PROFESSIONAL.  If I had to read it all over again, though?  I would rather have seen it come out as 1 book.  And generally, publishers do this anyway after.  So is it experimenting to see if the story is good enough to print?  Is it just to make more money?  I don’t get it, but I am slowly loosing interest and wish it would die out.  I don’t want to have to miss out on stories that I would’ve otherwise read because they are being released in parts.

So what do you think?

Under the Covers Book Blog
Author
Reply to  Tina F

Tina and Elizabeth, you’re totally right. We didn’t touch on the prices for those serials, but with some costing 99 cents each for only a few pages, they do add up quite a bit! Great points!!!

I get terribly frustrated with this trend of serials! Really, what is wrong with just writing the entire story and releasing one book? I don’t have time to follow a serial. I read so much that a serial would just get lost in the mish mash of my muddled brain. If I find a serial by an author I love or that sounds interesting to me, I wait until all parts of the story are out or until released in a bundle before I start it. Thank you for allowing me this mini vent!

Under the Covers Book Blog
Author
Reply to  Becky Parsons

LOL No problem, Becky! i think your gripes about serials are similar to what the majority of us feel like as well on this subject so feel free to vent all you want!

I do not care for them. I read voraciously and do not like to have a story line continually interupted waiting for the next installment of a book. I look forward to authors I enjoy but try to stay clear of chopped up books. I understand the premise of doing a trilogy of threecomplete books, but chopped up books make no sense to me. I appreciate your discussion of this matter.

Under the Covers Book Blog
Author
Reply to  rochelle halsen

I think I would rather have a trilogy with cliffhangers than have serials that are chopped up into too many parts.

I hate them with a passion, especially if it’s not noted up front that it’s only part of a book. I’ve turned down many ebooks that really sounded good but were part of a serial. I read an ebook that was really good and had over 300 pages and when I got to the end the story didn’t finish, left me hanging (which I hate no matter what activity!) and I almost threw my kindle at the wall. Needless to say, I’m very careful now when buying ebooks.

Under the Covers Book Blog
Author
Reply to  Denise

I think that has to be the most frustrating part of serials…..the waiting! ughh!

i’ve only read 2 & in both cases didn’t read them until all parts were out & i could read it as a single story (waiting btwn parts — no thank you, hard enough waiting btwn books in a series). the one was through amazon’s publishing & each part was added to the same book file, so when I read the completed novel it was just like reading a regular book (which was nice), & i didn’t mind the emails (since i had puchased the series at the start of it’s release) letting me know the next part was ready… Read more »

I will read serials but only when they are all published and I typically wait for the combo pack because it’s usually cheaper.

Don’t read them because of my attention span of a gnat! I have too many books to review and post. I know that Roni Loren’s was supposed to be awesome but she lost me when it took forever for them to publish.

That said…I will be buying Megan Hart’s just because she Megan Hart. Lurve her!!!!! Just waiting for them all to be published. That will be my vacation reading. Woot!