Today, Juliana Stone is continuing her blog tour and sharing an exclusive excerpt with us from THE DAY HE KISSED HER. 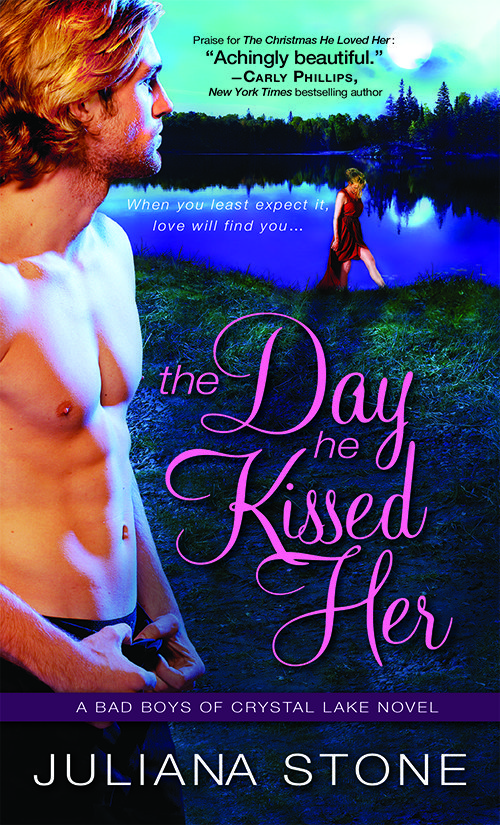 He can’t wait to leave…

Mac Draper finally has everything he’s always wanted: An amazing career. A New York City apartment. He’s this close to being free of his past forever. But a mind-blowing encounter with the sexy yet tough-as-nails Lily St. Clare has him delaying his plans to put Crystal Lake in his rearview mirror for good.

For Lily St. Clare the charming small town of Crystal Lake is her haven – a place she can hide from her famous, back-stabbing family. It’s as close to happy as she’s ever been. Until an unforgettable night with tall, dark and tortured Mac Draper gives her a glimpse of what true happiness feels like.

Lily can’t help but melt a little under the sizzling heat of Mac’s touch. But Mac’s scars run deep, and Lily’s afraid she may be falling for the one man who can never return her feelings…

She kept walking, aware that he was only steps behind and as she approached a pile of brush that had swept up onto shore, she paused, welcoming the cool wind off the lake as it rolled over her body.

God, she was hot. And bothered. And confused.

He stopped inches from her back and was so close that she felt the heat from his body. So close that his earthy, fresh scent filled the air around her.

The guy had been out in the sun all day. He’d played a hard fought game of touch football and didn’t have any business smelling as good as he did.

And even though it was childish, the first thought to enter her mind was that it wasn’t fair. And somehow wrong.

Suddenly irritated, Lily exhaled a deep breath and turned around.

Don’t look into his eyes.

But of course it was the first thing she did and boom, there went that damn horde of butterflies in her stomach. They flew and dove and man did they make her feel woozy. Mouth dry, she held on.

Luckily, years of hiding behind a mask of indifference saved her and she crossed her arms over her chest, arched an eyebrow and was able to manage a sentence without sounding like an idiot.

“Five minutes is all I got, so what’s so important?”

“Mac,” he said, eyes smoldering, without skipping a beat.

Surprised, Lily took a moment. “That’s it? You want to hear me say your name?”

He nodded and leaned closer. It took everything in Lily for her not to shrink away. For her to remain still as his warm breath slid across her heated skin. Goosebumps followed in his wake and she couldn’t hide the shudder that rolled across her shoulders.

“Are you going to make me beg?” His mouth hovered near her ear and she felt the imprint of his lips even though he hadn’t touched her.

She did nothing. Hell, she didn’t even breathe.

“Mac,” he said, his voice a little rougher. A little sexier. “Mackenzie is what my mother calls me. Mac is what my friends call me.”

She swallowed the lump in her throat, her eyes daring to travel up to his again. Wrong thing to do.

“And you think we’re friends.”

Juliana Stone’s love of the written word and 80s rock, have inspired her in more ways than one. She writes contemporary romance, paranormal romance and will debut a young adult novel in 2014. She spends her days navigating a busy life that includes, a husband, kids, a dog and a cat.

Sourcebooks has a copy of THE DAY HE KISSED HER up for grabs
to a lucky US or CAN maiden!

I live the title of this book.

thanks so much the book sounds really good

Just finished The Summer He Came Home. Looking forward to The Day He Kissed Her. Thanks.

this looks and sounds fantastic! Thanks so much for sharing!

This one sounds pretty good, and I always love a good romance!

Great excerpt! Thanks for sharing.

I have been loving this series! Mac deserves his HEA, so glad it is is his turn.

Looking forward to reading the third book in this series. love the cover too!

Thanks for the excerpt and giveaway.

Loving how the book sounds. Thanks for sharing the excerpt!

I just finished the second book in the series and as soon as Lily appeared in the story I just knew Mac was for her. LOL I can’t wait! I’ve loved both stories in the series so far:)