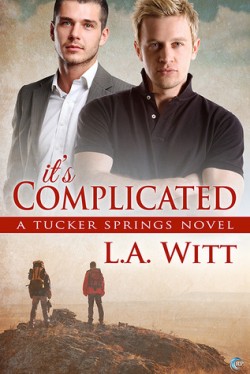 It's Complicated
by L.A. Witt

“IT’S COMPLICATED does tackle some serious issues, but Witt takes it and runs, leaving a big impression.”
~ Under the Covers

IT’S COMPLICATED is book seven in the Tucker Springs series by L.A. Witt. The premise of the book is one that I was unsure of when I first read it. It’s about a couple who are trying to rekindle their relationship with one another after many failed attempts. However, the impeccable timing of an unexpected pregnancy involving one of the men and his ex-wife really derails what Brad and Jeff have planned for their second chance love story.

Normally, stories involving baby drama are ones I veer away from. However, I found that Witt was really able to make this work in this book. Brad and Jeff have a powerful connection that is evident from the very first page. If that chemistry wasn’t present and in your face so clear in the beginning, I think my opinion of this book would have greatly differed. But because Witt handles the romance side of the book so well, the challenges that stand in their way seem minuscule in comparison.

Also, Brad is wonderful character. He handles the situation with Jeff and Christine so well and with such poise that I think he deserves his own moment to shine. Having both POVs from the men really helped in understanding their thoughts and where they came from. That’s important in such a complicated situation as this one.

Christine, Jeff’s ex-wife, also came across as multi-faced and wonderful. Witt was able to showcase her wishes and desires in just a few pages and I came to like what her character had to offer to the book. If she wasn’t so considerate of Jeff and their shop, I think this book would have crashed and burn and just been a big mess. Witt did a fabulous job with the characterization in this one I think.

IT’S COMPLICATED does tackle some serious issues, but Witt takes it and runs, leaving a big impression.

Thanks for the review. I have been on the fence about getting this book based on the synopsis. The baby drama was a main factor. Will have to reconsider getting it.

I was a little iffy going into the book for the same reason, but I was in for a treat because Witt handled it very gracefully I think. Enjoy!

There is so much going on in this one. The title is perfect for it. Thanks for sharing your thoughts, Annie!

Yes, I tried really hard not to describe it as complicated, but I think it works very well.

I haven’t started this series yet but I was able to get my library to purchase and I’m looking forward to reading.

Let me know what you think Amy!