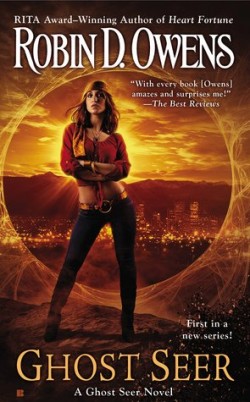 “I wasn’t blown away with this Ghost Seer, but I enjoyed it enough…I definitely would love to read more of Clare’s adventures and her side kick, Enzo.” ~ Under the Covers

I’m not one to pick books with ghosts only because, well, I’m a scaredy-cat but after seeing the very intriguing cover, I just had to take a chance. Ghost Seer is not a horror themed ghosts, but it’s more of an urban fantasy or paranormal read with a hint of suspense. I found this book to be quite entertaining.

Clare was given a very extraordinary gift by her aunt who recently passed away. Along with a lump sum of money, Clare was given the gift of the ability to see ghosts. Unfortunately, this gift of hers comes at a high price. If, in any way, she ignores it, she can go mad or simply die. Without any choices, Clare will have to deal with a ghost who seeks her help to cross to the other side. It looks like Clare’s fate will be helping these ghosts to deal with unfinished business. But it won’t be without help from a very cute dog, Enzo and her new found love Zack.

I enjoyed the romance between Clare and the ex-sheriff, Zack Slade. I love that they were interested despite the obvious emotional baggage the other carries; Clare with her new ghost talent and Zack with his leg disabilities. Self acceptance is a biggie for these two and I think that’s what kept me turning the pages. I needed to see them find their peace.

I like Clare and her denials of the phenomena of ghosts are almost hilarious. Right from the start, she is haunted by a ghost dog named Enzo who became her guide to her new life. Their conversations and how Clare’s attempts to ignore him in public made me laugh. Enzo is just adorable. Owens also surprised me by adding history in the story. She infused this book with western history which I thought was totally cool.

I wasn’t blown away with this Ghost Seer, but I enjoyed it enough. It was a bit slow for my liking, but the story line was entertaining. I think this series has potential and I’m hoping for a bit faster pace in the second installment. I definitely would love to read more of Clare’s adventures and her side kick, Enzo.

RITA® Award Winning novelist Robin D. Owens credits the telepathic cat with attitude in selling her first futuristic/fantasy romance, HeartMate, published in December 2001. Since then she has written thirteen books in the series, Heart Fortune the latest in August, 2011.

Her five book Luna series included average American women Summoned into another dimension to save a world. Her Mystic Circle series is a mixture of contemporary urban and romantic fantasy set in Denver.

And her newest stories, about an uptight accountant who sees Old West ghosts and helps them move on, will start with Ghost Seer in April of 2014. She is profoundly thankful to be recipient of the 2004 Rocky Mountain Fiction Writers’ Writer of the Year award as well as the 2011 Writer of the Year Award, the Colorado Romance Writers Lifetime Achievement Award and the 2010 Best Paranormal and Best of the Best Daphne Du Maurier Award…actually, after winning an award she tends to dance around bored cats.

Thanks for the review and author intro Angela.

Thanks for passing by Elizabeth. I hope you try it out.