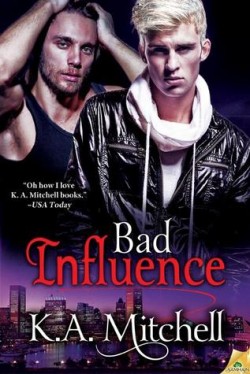 While BAD INFLUENCE didn’t resonate with me as much as I had hoped it would, it’s still a great read if you enjoy angst in your books. ~ Under the Covers

I’ve been a big fan of K.A. Mitchell for awhile so I was excited for the fourth book in the Bad in Baltimore series called BAD INFLUENCE. However, upon starting, I felt something different about this book. At first, I wondered if it was because I wasn’t in a good reading mojo. The week had been a brutal one and had sapped a lot of my emotions out already, but for some reason, I still couldn’t find myself connecting to a lot of the characters in this book.

Jordan Barnett told his parents he was gay. Instead of accepting it, his parents threw him out and put him in a conversion camp where they hoped they could remove him of his sins. Jordan then went to see someone he trusted to help him out of the situation, but was turned down. Despite his broken heart, Jordan didn’t give up but transformed into Silver, a street-savvy man who became a prostitute.

I really liked Silver. I thought he was the one character in this book that had different dimensions, wasn’t overly annoying and had a strong presence. However, the rest of the characters seemed to annoy me most of the time as I read. Mitchell places a lot of emphasis on past characters in the series. While I think it’s nice to have the tie in, it also creates for a lot of drama, especially when you include individual as well as couple issues. The story becomes too convoluted with everything that is going on.

Because of that, I also feel that Zeb’s character wasn’t really formed fully. He didn’t stand out very much and I still don’t know why. I just never really connected with him at all and found his character to be forgettable. As a result, it made it hard for me to believe in the romance.

So while BAD INFLUENCE didn’t resonate with me as much as I had hoped it would, it’s still a great read if you enjoy angst in your books.

K.A. Mitchell discovered the magic of writing at an early age when she learned that a carefully crayoned note of apology sent to the kitchen in a toy truck would earn her a reprieve from banishment to her room. Her career as a spin-control artist was cut short when her family moved to a two-story house, and her trucks would not roll safely down the stairs. Around the same time, she decided that Chip and Ken made a much cuter couple than Ken and Barbie and was perplexed when invitations to play Barbie dropped off. She never stopped making stuff up, though, and was surprised to find out that people would pay her to do it. Although the men in her stories usually carry more emotional baggage than even LAX can lose in a year, she guarantees they always find their sexy way to a happy ending.

Hmmm sad this didn’t go as well as the others in this series :/