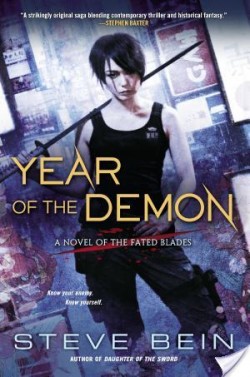 Year of the Demon
by Steve Bein

Being the only female police officer in Tokoyo can be tough but Detective Sergeant Mariko Oshiro has been promoted to Narcotics. Her new case though strikes closer to home, how can an old iron demon mask, her Inazuma sword Glorious Victory Unsort and the strangest drug deal her and her new partner has ever seen be connected? But, the history of the mask and the sword began hundreds of years before and the sword and the mask’s deadly relationship is now making itself known in the present.

I really enjoyed the first book in this series Daughter of the Sword and I continue to enjoy the Fated Blades series with this installment, Year of the Demon. Its clever mixture of present and past events makes this an intriguing story.

Year of the Demon continues the format of the previous book, by showing half the story in the present with Mariko, the current holder of a very famous sword Glorious Victory Unsought, and the other half shown in hundreds of years ago with a past owner of the sword, Daigoro Okuma. I like the way the past is used to explain some of the mysteries in the present, piecing together a puzzle that seems to have started a hundreds of years before Mariko was even born.

The book, although it could feel slow at times, did tell an interesting story, one that kept me reading and wanting more. I look forward to the next book in this series where I can follow the characters from both the past and present, as well as the intriguing history Steven Bein has created for the sword and the mask. 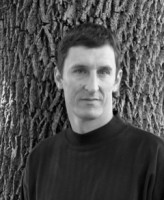 Steve Bein (pronounced "Bine") is a philosopher, photographer, traveler, translator, climber, diver, and award-winning author of science fiction and fantasy. His short fiction has appeared in Asimov’s, Interzone, Writers of the Future, and in international translation. Daughter of the Sword, his first novel, was met with critical acclaim.

Steve was born in Oak Park, Illinois, a near west suburb of Chicago. His first career as a perpetual student took him to universities in Illinois, Germany, Japan, and Hawai‘i. That all culminated in a PhD in philosophy from the University of Hawai‘i at Mānoa. Today Steve is a visiting professor of Asian philosophy at the State University of New York at Geneseo, where he also teaches ethics and philosophical themes in science fiction.

His other academic interests include bioethics, which led him to a short stint as a visiting researcher at the Mayo Medical School, and environmental philosophy, which led him to see polar bears in Canada and penguins and whales in Antarctica. His more recent travels have taken him to historical sites and art museums around the Mediterranean and to wildlife preserves across southern Africa.