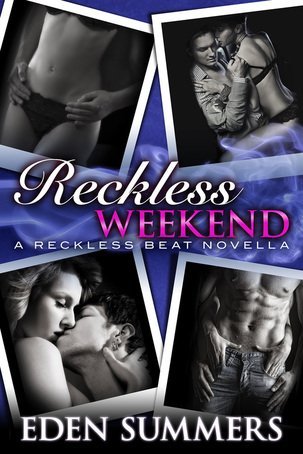 In Vegas, a lot can happen in twenty-four hours.

What do you get when you mix a rock band as hot as Reckless Beat, women strong enough to capture several of the bad boys’ hearts, and a bet that sparks a competitive streak?

Boundaries will be pushed, alcohol will be abused, and loads of sarcasm will be shared.

Once the games are over, it’s time to make a commitment. But love in the limelight is never easy. The past is trying to catch up with the present, and the pressure may be too hard to handle.

Seduction, torment, laughter, and heartbreak—one reckless weekend will test each member of the band and the women who’ve claimed their love. 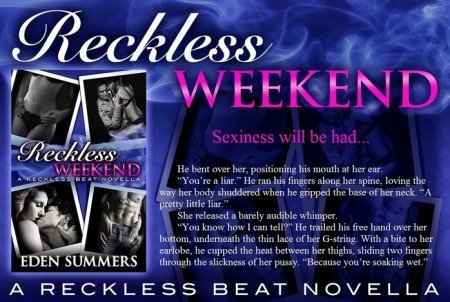 The guys stared at him with varying degrees of disbelief and annoyance—Sean, Mason, their two bodyguards, even Ryan wasn’t impressed. The one person who didn’t seem pissed was Blake, who sat on the couch across from him, legs crossed at the ankles and a knowing grin tilting his lips.

“What are you smiling at?” Sean jutted his chin at Blake. “Did you get laid or somethin’?”

Blake shook his head. “I wish. I spent the last six days in Richmond with grumpy-ass here.” He jerked his thumb in Mason’s direction. “When I got home, Gabi was surfin’ the crimson tide, so I couldn’t get lucky if I tried.”

“So what’s with the smirk?” Ryan asked.

Blake outstretched his arms along the back of the lounge. “Can’t a guy be happy to spend quality time with his friends?”

“You know what’s on the list, don’t you?” Mitch asked, dread growing in his gut. Blake was the only person at the bachelor party who knew the honeymoon issues were fake. Yet there was something more to the gleam in his best friend’s eyes.

“Gabi may have given me a hint or two.” Blake turned his gaze to Mason. “And why the hell do you have your panties in a bunch about the Brazilian? Didn’t we put the same thing on the list for the ladies?”

“There’s a big fucking difference, bro,” Mason huffed. “Women get their shit waxed all the time.”

Sean cleared his throat. “I’ll do it.”

Mitch turned his attention to Sean along with everyone else in the room.

“What?” Sean frowned, lowering his gaze to the glass in his hands. “I’ve had it done before. No big deal.”

“You’ve had it done before,” Mason repeated, emphasizing the words with slow deliberation. “You’ve had the hair ripped from your balls, just for the hell of it?”

“It’s not like it’s all pain and no gain. I’ll get my pole smoked afterward.”

Sean shrugged. “They’ve never let me down before.”

“OK.” Blake drawled with widened eyes. “So we’ve determined who’ll get kicked out of the beauty salon first. What else is on the list?” 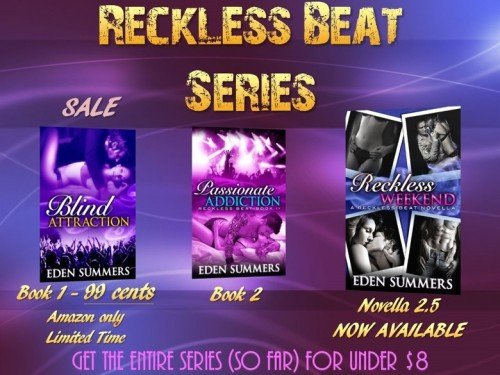 Get BLIND ATTRACTION for $0.99 on Amazon NOW! 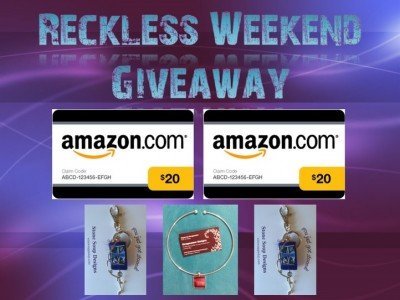 This giveaway is open Internationally.
Keycharms and necklace come with paper swag.

I’ve read Blind Attraction and am looking forward to checking out the rest of the series.

Thank you, Amy. I hope you enjoy the rest of the series.

i havent read the series yet but on my tbr list

No, I haven’t but I’d definitely love to.

This is a new to me series.

I have not started this series yet. It is on my TBR list. It does sound like an amazing series 🙂 Thank you.

Haven’t read them yet but just moved them to the top of TBR list,

Thanks for giveaway. I have first book in series got on Wednesday haven’t read yet but look forward to it

I hope you enjoy my rockers, Sonia

Umm, er, No haven’t read yet, but I do have in my tbr mountain. I will see if I can dig it out for reading. 😉 So much to read – so little time. Wonderful giveaway! Thank you.

Dig, dig, dig, Becky!! Push it up that mountain. 😉
I hope it is worth the wait once you finally read it.

I have started Blind Attraction but still need to pick up the rest of the series. I had to laugh at the excerpt here. Thanks for sharing!

I haven’t started the Reckless Beat series yet, but looking forward to it!