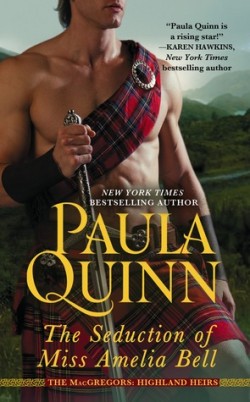 The Seduction of Miss Amelia Bell
by Paula Quinn

“The Seduction of Miss Amelia Bell is a wonderfully written Scottish romance. It was filled with light hearted humor and a very sweet romance.” ~ Under the Covers

Amelia is to marry the Chancellor of Scotland, but the decision is not by choice. This marriage is to help her dad’s financial status but obviously, her heart is not in it in the least. Meanwhile, Edmund, a true Scottish patriot has plans to kidnap her in hopes to stop the treaty between Scotland and England. Edmund and his cousins will be successful with their plans but sticking to it will be harder than they thought.

The Seduction of Miss Amelia Bell is a wonderfully written Scottish romance. It was filled with light hearted humor and a very sweet romance. Amelia had me laugh out loud with her clumsiness. She truly believed it was a curse that she kept getting into accidents. Edmund, on the other hand, just adored her and found it adorable. During captivity aka hanging out with Edmund and his cousins, Amelia earned their love and respect….earning a permanent spot in their family. They had such a sweet courtship and I have to say it was quite sexy.

Sub stories were quite entertaining, as well. Lucan and Sarah’s relationship started out odd, but it’s one story I really want to read more about. Sarah is such a delight. Darach’s story already has a great set up though I believe it is not the next book out. I also enjoyed Edmund’s dog, Grendel’s story. His love for his owner and his new found love was just adorable. It was both sweet and heartbreaking. Whether you’re a dog lover or not, you’ll enjoy his story And how it ties to Edmund and Amelia’s happy-ever-ending.

If you’re not up and up with the MacGregors and the Grant family, Ms. Quinn has their family tree on her site.  Click here.

It’s been AGES since I’ve read historical romance but men in kilts are one of my favorites. I’m a believer that these Highlanders are the original Alphas, you never mess with them and landing one is equivalent to winning the lottery.

Braine, Sometimes, you just need a break from all the other genres and go with a historical. Highlander is my ultimate fave when it comes to historical. You’re right they are totally Alphas. This book is a good one. I really liked it. ~Ang