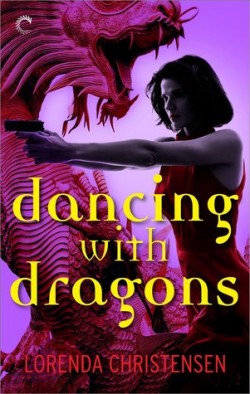 Bancing with Dragons
by Lorenda Christensen

Lorenda Christensen’s post-apocalyptic world where humans live with dragons continue to intrigue me. Since reading the first installment, Never Deal With Dragons, I have waited to read more of this world.

First let me say that a world with sexy and dangerous dragons is just sexy to begin with. Seeing the hero, Trian from the last book was such a treat. I actually thought this installment is a continuation of his story; poor research on my part. Nevertheless, the hero in this book Daniel Wallent is a reporter covering dragon politics around the world. I didn’t like Daniel at first, and it took a while, but he ended up to be a good guy in disguise. I enjoyed getting to know him.

Just like Daniel, Carol was not easy to like…at first. Don’t get me wrong, she still kept me interested. She was put in a dangerous predicament, and all she thought of was her clothes and how she looked. I thought she was funny and fairly entertaining. There was also a hint of cheating in her relationships.  Her ex-beau was a classified A.hole but still; it was too easy for her to forget him and move on.  It wasn’t until after half way through that Carol’s situation starts sinking in and her persona started to change. She’s not my favorite heroine, but I did like her in the end.

It wasn’t easy rating this book. I was torn about a few things. I like the protagonist and their love story but getting to that point took a while. The dragon appearances and any kind of action were also delayed until passed 60-70%.  Once the tempo picked up to exciting, I couldn’t put the book down.  I’m hoping Ms. Christensen ups her game and move up to the good parts of the book sooner than later.  Her world of the DRACIM has so much potential.

A native of Eastern Oklahoma, Lorenda lives with her husband and two sons in a house that feels far too small during the stay-inside winter months. Lorenda loves chocolate, hates snakes, and despite living two years in Bangalore next-door to a native preparer of Indian cuisine, cannot cook anything but ground beef. She is a recovering nail biter, and is currently celebrating five years bite-
free.

I love dragon stories and have recently started appreciating post apocalyptic stuff so I’ll have to seek these out.