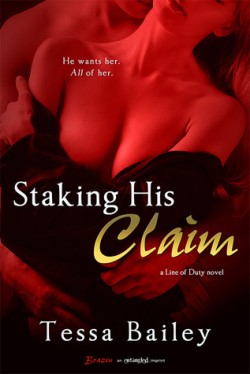 Staking His Claim
by Tessa Bailey

STAKING HIS CLAIM is possibly the sexiest of them all! It hits harder, hurts more and stings so sweet! ~ Under the Covers

STAKING HIS CLAIM is the last in the Line of Duty series by Tessa Bailey. Does that mean we won’t be having any more dirty-talking heroes!? This upsets me! However, Bailey does end off with a bang! STAKING HIS CLAIM is possibly the sexiest of them all! It hits harder, hurts more and stings so sweet!

Matt Donovan has some Dom tendencies. He likes control in the bedroom and his last relationship he had made him resent it. However, when he is responsible for driving his best friend’s sister home, sexual tension mounts quickly between them until a filthy romp in a cheap motel room ends up changing both of their lives. Both Matt and Lucy want what they can’t have, but it isn’t as easy and telling her brother that they want to be together. They have to figure out HOW they are going to be together, especially as Lucy is receiving great career opportunities as far as Paris.

In addition, seeing the past characters in the series is always nice. Their interaction almost reminds me a little of Elle Kennedy’s Out of Uniform series as well, so if you’re a fan of one, definitely check out the other!

If I had to pick out a negative, I would say that sometimes, the plot or the set up of a scene seems like it is all made up to lead into an epic sex scenes. As I mentioned before, the sex is one of the most important and best parts of this series. However, I do sometimes feel like some of the events feel too contrived in order to set up the sex scene well.

Other than that, STAKING HIS CLAIM is a great addition to the series. Saturated with lust-crazed sex scenes and hotter-than-hell dirty talk, you’ve got a story that will singe your eyebrows if you aren’t careful!

This was on my kindle this morning but I still need to read book 4 first.

I will have to check out this series….thanks annie

Thanks for the review Annie…looking forward to reading it!

I loved this series.

[…] Matt Donovan has some Dom tendencies. He likes control in the bedroom…STAKING HIS CLAIM is possibly the sexiest of them all! It hits harder, hurts more and stings so sweet! (4 stars!) […]