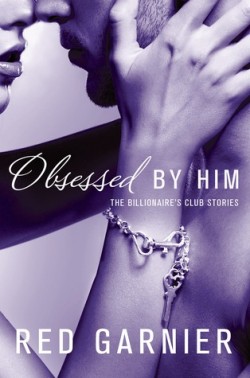 Obsessed by Him
by Red Garnier

Both passionate and intense, Garnier takes an overused trope and puts her own spin to it, creating delicious heroes that have all made it into my harem. ~ Under the Covers

OBSESSED BY HIM is a series of five sexy as hell novellas featuring uber rich billionaires and the women who bring them to their knees.

This is Graves and Chloe’s story. Chloe is Dylan’s little sister and a socialite herself. A virgin at 25, Chloe has already picked the man she wants to pop her cherry. However, Graves is a man of iron will and despite his burning need to touch Chloe, he resists.

Despite some over the top and cheesy parts, this story still brought on the flames and made me laugh. As it was my very first story by Red, I didn’t know what to expect, but still found myself entertained by the billionaire trope. After reading this, I knew I wanted more.

Luke Preston made such an impression in the first story that I knew I was going to love his story. After surviving a brutal assassination attempt, Luke takes a vacation to Cancun to heal and regroup. Except he finds more trouble in the way of a sexy lady named Peyton Lane.

Just as I had expected, Luke’s story turned out to be one of my favorites. Brimming with passion and powerful love, this fun and sexy story made me remember why I love billionaire stories in the first place.

One thing I noticed about Garnier’s writing is that she is so readily able to change her voice to suit the story and characters. The first story is more reserved and focused on the sexual tension because Graves is a very restrained guy. On the other hand, Luke is the playful joker of the bunch and Garnier really plays with that in this story. I LOVED that!

Andrew Fairchild has returned home but instead of finding open arms, he finds a bitter Whitney who isn’t happy about him being gone for so long. In an attempt to soft her up again, Danny lays on the charm and the seduction, creating a very sexy story that I gobbled up.

Whitney has had a dark past and though it adds some depth to her character, I also found that the length of the novella was too short to really explore her background in the way I would have liked. However, nevertheless, Garnier once again adapts to create a convincing romance that I enjoyed reading.

When meeting Daniel in the first story, I was very excited to read about him. Named The Prince, Daniel’s actions are always the talk of the town, so when he and The Ice Maiden appear together, it makes news everywhere.

Monica has never had a orgasm during sex. Although she is passionate about her job, many see her as impersonal and therefore, she is called The Ice Maiden. However, Daniel Lexington knows there is nothing icy about the fiery goddess he takes to bed. A brief affair soon turns into something far more romantic for these two and I found that Daniel’s story became one of my favorites in this set.

Another anticipated story is Cade West’s. We learn that his young wife died because of cancer and for ten years, Cade hasn’t slept with another woman, mourning her death for what seems like forever. It isn’t until Ivy Summers walks into his life, asking for a monetary donation for the charity she works for that Cade sparks to life again.

He gambles and when the game of poker soon leads to both of them naked and between the sheets, Cade is quickly realizing that this isn’t just a game to him anymore. This story is also one of my favorites. Combining heat and heart in an enticing mix, Garnier continues to astound me with her ability to create original, heartfelt stories with killer sex scenes.

It seemed that each story was hotter than the first, building like a fire that didn’t want to be put out. If this is any indication of Red Garnier’s writing, then I am glad that I found these books because I will definitely be checking out the upcoming releases when they come out.

Both passionate and intense, Garnier takes an overused trope and puts her own spin to it, creating delicious heroes that have all made it into my harem.

Red Garnier is a lover of love, laughter, and hot, steamy sex. She lives with her husband - the love of her life, her very own hero! - and is a proud mother of two.

She was born to write, to say what's on her mind, and to make a few tongues wag along the way. When Red is not writing, she's probably found with her face glued to a sizzling romance book.

Sounds like a great collection…thanks for the review Annie.

I’ve been looking and looking at this series….thx annie!