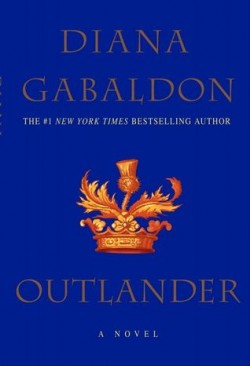 OUTLANDER completely took me by surprise and robbed me of my breath. A natural born storyteller, Diana Gabaldon’s stories are compulsively readable and deeply romantic. Trust me when I say you want to meet Jamie Fraser. They just don’t make heroes like him anymore.  ~ Under the Covers

I was procrastinating on Twitter when I came across this picture from Sam Heughan who will be playing the iconic hero, Jamie Fraser come summer in the new Starz adaptation of Outlander. As a romance junkie, I was immediately struck by the image – the leather jacket and the kilt (yum), the classic cut of her dress and most importantly, the way he is holding and looking down at her. The chemistry was right there for all to see and when I saw it, it sparked something inside of me. I knew I had to read the books now. 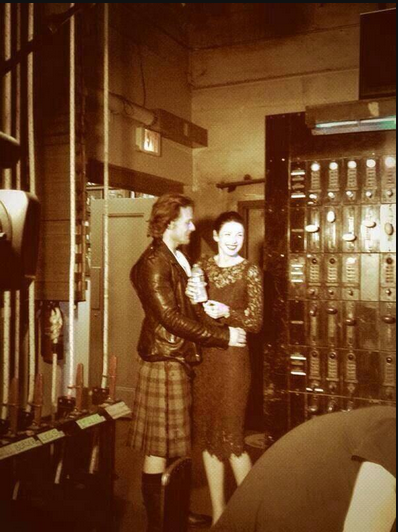 The caption along with the image reads: ”Love this photo from yesterday’s event! (Trying to stop Cait touching buttons and levers)”.  Right, Sam. We all know you were just copping a feel 😉 Already, I feel like a fan of the show even before I’ve seen the pilot episode.

For those of you who don’t already know, Outlander is a book that transcends many genres, running from Historical Romance, Historical Fiction, and even some sci-fi elements as well. It really has something for everyone. The big reason why I didn’t jump into this series earlier was because of its sheer size. It’s daunting at first and can be a test of patience. However, I found myself completely submerged into the world that Diana Gabaldon has created once I started. I can also tell you, it’s nearly impossible to stop once you do.

Immediately, Gabaldon’s authorial voice wraps you up in a sinful embrace, coaxing you into a world full of vibrant emotion and exquisite attention to detail. While heavy on history and facts, I never once felt that it bogged down the storyline, instead saturating it with its lush imagery and presence.

Claire’s character deserves a mention. As OUTLANDER is written in a first person narrative, readers get a front and center look through Claire’s eyes. Right from the get go, I loved Claire’s character. Anything that is thrown her way, she is up to the challenge, never wavering or doubting her abilities for a second despite the fact that she is thrown back 200 years earlier where everything is different. She might as well be living on an entirely different planet for all the changes she encounters. Her courage and heart are numerously displayed throughout the book and while many things, such as her initial thoughts about the world change, the core attributes that make her such an amazingly strong female character remains the same. I found myself absorbing her emotions like a sponge; when she fears, you fear. When she hurts, you hurt. And when she loves, you do too.

This brings me to the sole reason why I fell in love with this book. Jamie Fraser. Oh Jamie. Is there another hero that I love more? Probably not. Jamie has shot straight to the top of my favourite heroes list. When we first meet him, he’s young and still has a ways to learn about the world, but there’s also this sturdiness about him that draws Claire in. Their romance builds slowly as it’s a very delicate situation they are all put in, but Gabaldon builds on that initial attraction and transforms it into one of the most romantic, timeless love stories I’ve ever read. Jamie is the main reason for that. Some of the things he admits just absolutely break my heart.

“Oh, aye, Sassenach. I am your master . . . and you’re mine. Seems I canna possess your soul without losing my own.”

Gabaldon also loves to add layers to her stories through her characters. As they retell past events, this has two purposes: it tells the reader additional information/backstory about the character and it also acts as a bonding experience for the two characters involved. Because readers are experiencing it from Claire’s perspective, her character continuously builds relationships (and enemies) through this way.

Jenny, Jamie’s sister and Ian, her husband were two of my favourite secondary characters. However, the witch comes a close second. Randall has to be one of the best villains I’ve encountered in a long time. I absolutely HATED his guts. Every time he walked onto the page, I cringed, knowing that there would be a drastic turn for the worse.

What surprised me about this book was the level of violence. But upon further consideration, I don’t know why I was so surprised. It was a different time. There is one scene I can think of that may or may not evoke some conflicting emotions. However, I could also understand why it happened and why Gabaldon chose to write it the way she did.

OUTLANDER completely took me by surprise and robbed me of my breath. A natural born storyteller, Diana Gabaldon’s stories are compulsively readable and deeply romantic. Trust me when I say you want to meet Jamie Fraser. They just don’t make heroes like him anymore. 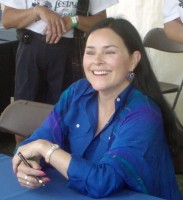 Diana Jean Gabaldon Watkins grew up in Flagstaff, Arizona and is of Mexican-American and English descent. She has earned three degrees: a B.S. in Zoology, a M.S. in Marine Biology, and a Ph.D in Ecology.

She currently lives in Scottsdale, Arizona .

Are you ready to experience OUTLANDER?

The epic tale becomes a reality. Welcome to the world of Outlander.
Outlander comes to STARZ Summer 2014
and will be internationally distributed by Sony Pictures Television. 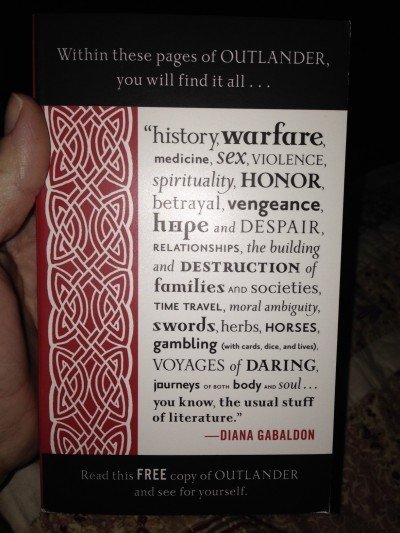 We have a special promotional edition copy of OUTLANDER
up for grabs today to a lucky US maiden!

love the review thanks for the giveaway

This sounds really good…Thanks for the review Annie!

Great review Ann! I’m not surprise that all the time I told you this was my favorite book never got you in the mood to read it, but you see a half naked hunk in a kilt…And sure, right to the book you go..LOL
I’m don’t care what it took to get you to read it, I’m just SOOO happy you did, and now we share the love for Jamie 🙂
Great job!!!

Under the Covers Book Blog
Reply to  Lupdilup

Awww! I am SO GLAD that you pushed this book! You’re right, a hottie like Jamie in a kilt is to die for!

I’ve read amazing reviews of this book that I’m now putting it on my TBR list. I can’t wait to read it and hopefully watch it on tv

Great review. Welcome to the world of #Outlander

I’m listening to Outlander on CD in the car. Great way to commute!

This series is absolutely amazing and I tripped over Outlander by happen chance at a second hand shop when I was just browsing out of boredom. It was not long before I was gathering up each book and the books in Lord John’s series until now I’m left waiting like so many for the latest release. Glad you loved it.

Sounds like a very interesting read. Thanks for the giveaway.

Cute photo, I want to read this book too.

I loved the review. Now I just need to read this book. So many people recommend it.

I’ve had this book on my TBR pile for awhile but once I heard it was to be a TV show decided to wait and read it at a later date. It sounds like it contains everything I love-Historical Romance, Historical Fiction, and even some sci-fi elements- sounds like a totally awesome read.

Great review of a great book , characters and series! If I weren’t already a fan, you would have hooked me!

I sooo need to start this series 🙂 Thanks for the awesome review and giveaway!

I love her books!

I’m adding it to my To Read list because of your review :-))) Thanks!

My favorite series of all time, thanks for the review! I can’t wait for the television series. I love that giveaway cover – that should be on all of the books 🙂

Great review. I can’t wait for the TV series!!
TY for the give-away.

I am ashamed to say I haven’t read this book. I have heard so much about it and now a tv show, I must read it!

you make me want to watch the show and read the book,good review

I have known about this book & it’s characters for a while & agreed am afraid of it’s size… but after watching all the buzz & previews for he Starz series I MUST HAVE I READ! WOW

Thanks for the review, I haven’t read any of the series yet but I have heard great things on Twitter and your review just added to that. I am looking to watching the show on Starz this summer.

Hi, thanks for this awesome giveaway! Can’t wait to read the book before the TV series.

Really great review. I loved the book and can’t wait for the series to start.

Love it! I’m so happy they’re making it into a tv series 🙂

So glad for the success of Outlander. Must read it soon!

This sounds like a really good book, thanks for the helpful review! And now I need to find out more about this show…

Great review! I really need to get on reading this.

Nice review; haven’t read it yet

Oh, this is one of my all time favorite series! The first time I read it I read the first book through in one day (well, I stayed up late into the night but still 😀 ). I’ve reread the series several times now and cannot WAIT for the miniseries! Excellent all around 🙂

Review: Voyager by Diana Gabaldon | Under the Covers Book Blog

Review: Written In My Own Heart’s Blood by Diana Gabaldon | Under the Covers Book Blog