BETWEEN THE DEVIL AND IAN EVERSEA is book number nine! Please tell us more about this upcoming release.

Readers of the series know Ian Eversea is a renowned rogue—our last visit with him was in WHAT I DID FOR A DUKE, when he was forced at gunpoint to exit through the bedroom window of the Duke of Falconbridge’s erstwhile fiancee. And in this book…well, let’s just say windows continue to play an important (and dangerous, and poignant) part in Ian’s destiny. 🙂 I won’t tell you how, just yet. Ian has no plans to change his ways, let alone get himself leg-shackled.

Enter Titania Danforth. English by birth, raised American, recently orphaned, she’s the Duke of Falconbridge’s new ward, and he’s charged with ensuring she makes a spectacular match. She’s precisely the sort of woman who bores Ian—too young, too innocent, too sheltered. But there’s much more to Titania “Tansy” Danforth than meets the (admittedly dazzled) eyes of the men of Sussex. She turns the entire countryside upside down, stealing hearts and beaux, enthralling everyone except the one man she wants to fascinate, the one man the duke will NEVER let her have… Ian. But when it looks like Tansy’s hijinks might threaten the happiness of someone he loves, Ian calls her on her game He just never expects that she’ll call him on HIS. Or to discover that Tansy’s has depths and secrets that rival his own, and that when he discovers what lies in her heart he might finally lose his…to the one woman he can never have.

I had such a fabulous time writing the dynamic between these two. I think readers will love reading about Ian from his own point of view, and yes, you can expect a showdown between him and the duke. 🙂

How do you decide which couple will get their book next in a series?

Well, the couple kind of decides for me. 🙂 Usually a dozen or so story idea are sort of simmering away in my brain at any one time, and the one that starts to really boil—that’s the one I turn my attention to, sit with, and if it’s right, the story will start to really unfurl in my mind. But there’s a logical progression, too: whose story will help move the series along, or reveal something new and interesting? It’s kind of an intuitive process.

Of all your heroes that you’ve written, is there one that you love above all?

Oh, that’s such a tough question! Mainly because I always fall so hard for the hero I’m currently writing. 🙂 I loved writing Jonathan Redmond in IT HAPPENED ONE MIDNIGHT, because we’ve watched him grow up throughout the series, and he not only becomes a formidable man in the story, he becomes pivotal to the entire series. He surprises everyone, including himself. I LOVE the man he’s become. But I confess I still have a soft spot for Vicar Adam Sylvaine of A NOTORIOUS COUNTESS CONFESSES. A quiet, smoldering, a good man with formidable control, maturity, and enormous stores of passion. The conflict in his story was delicious and difficult to write (but also a pleasure to write for that reason). And I think readers agree: e.g., reades at AAR voted him Best Hero of 2012, and they voted A NOTORIOUS COUNTESS CONFESSES best overall romance. We’ve had some Hollywood interest in developing the story as a TV movie.

You are hosting a dinner party. If given the chance to invite characters from other series, who would you invite?

Wow, that would be one crowded dinner party, if I had my way!! I think I’d like a nice mix of personalities and ages, of wit and wisdom, erudition and earthiness, genres, periods of history and good conversationalists. And maybe one or two with magic powers.

I could play this game forever, but I have a deadline, so I’d better stop. 🙂 And besides, Agatha Raisin will probably accidentally knock over a candlestick and light the tablecloth on fire, and the party will end early.

If you only had twenty dollars in your purse,what would you buy?

Let’s pretend it’s a serendipitously found $20, and it’ll vanish if I don’t spend it within a half hour of finding it. And let’s say I’m walking down the street in my San Francisco neighborhood. I’d buy a brownie, go to the antiquarian/used book store and pick out some intriguing, falling-apart, musty-smelling book, get a cup of steaming hot green tea, and then I’d make a wish with one penny in a fountain in the park and give the rest to the homeless guy who hangs out outside the grocery store.

Since it’s Historical month at UTC, we want to know why you love the era in which you write in and perhaps share with us one or two of your favourite books that explore that time period.

I fell in love with the Regency thanks to Jane Austen and Amanda Quick, primarily. Those two were my gateway drugs, let’s just say. 🙂 The mores and class stratification of the era contribute to delicious, interesting romantic conflicts, and who can resist a man in tight trousers and Hessians? As for books I’ve found inspiring: I love THE REGENCY UNDERWORLD (Donald Low) and The Hanging Tree: Execution and the English people (V.A.C. Gatrell), both fascinating research books, particular when I was writing THE PERILS OF PLEASURE. I often daydreamed while looking at Greenwood’s 1827 Map of London, too, as if it were a Board game, and I could see people moving through the city, going about their business. 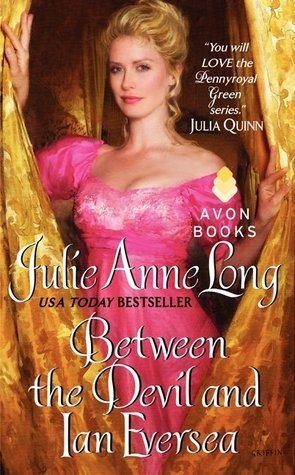 The moment orphaned American heiress Titania “Tansy” Danforth arrives on English shores she cuts a swath through Sussex, enslaving hearts and stealing beaux. She knows she’s destined for a spectacular titled marriage—but the only man who fascinates her couldn’t be more infamous…or less interested.

…but it takes a devil to know one…

A hardened veteran of war, inveterate rogue Ian Eversea keeps women enthralled, his heart guarded and his options open: why should he succumb to the shackles of marriage when devastating good looks and Eversea charm make seduction so easy?

…and Heaven has never been hotter.

When Ian is forced to call her on her game, he never dreams the unmasked Tansy—vulnerable, brave, achingly sensual—will tempt him beyond endurance. And fight as he will, this notorious bachelor who stood down enemies on a battlefield might finally surrender his heart…and be brought to his knees by love.

USA Today bestselling author Julie Anne Long originally set out to be a rock star when she grew up (and she has the guitars and fringed clothing stuffed in the back of her closet to prove it), but writing was always her first love. Since hanging up her guitar for the computer keyboard, her books frequently top reader and critic polls and have been nominated for numerous awards, including the Rita, Romantic Times Reviewer’s Choice, and The Quills, and reviewers have been known to use words like “dazzling,” “brilliant,” and “impossible to put down” when describing them. Julie lives in Northern California.

If I had only $20 in my purse and was close to a book store, I would spend $15 at the store and keep $5 for walking around money until payday.

Looking so forward to this release. I enjoy all you books and I do agree with you. I fall in love with every H when I am reading the book, then just as quick move on to the next H. What a book whore!!! lol

So cute, Debbie Lou! I think that makes ALL of us book whores! LOL.

What fun questions! I am sadly wishing my life away waiting for book releases. 🙂

What an interesting insight to one of my favorite authors! thank you! And J.A.L. sure knows how to stretch a twenty dollar bill while still managing to help another! 🙂

Great interview! And thanks for the biblio tips, Julie!

Great interview! I am looking forward to read Ian story. Thank you.

Will there be a few more clues on Lyon & Olivia in the new book?

Definitely, Kim! And an interesting development for Olivia!! 🙂

Oooh the blurb has me intrigued!

This was a really fun blog! I too loved Adam Sylvaine. But then, I loved all of them when I was reading them! Some of the best parts are the long standing feud and how our lovers find a way! Can’t wait for the next one, Ian needs his true love!

I’m so glad you love the series, Jinny! And i hope you love Ian’s book, too. The early feedback I’m hearing is so thrilling—one early reader called it “spectacular!” Can’t wait to hear what everyone thinks! 🙂

I’m looking forward to reading this book. I so enjoy Julie Anne’s work. Glad to see her featured here on this blog today.
Thanks

A new author for me….thanks utc!

Great interview! I have a few of the books in the series & hope to get the rest & read in order. I have heard good things!

I cannot wait for the next installment. Perhaps the Ballad of Collin Eversea will get a companion song abt The Duke and Ian…the battle of wills will be highly entertaining, lol

I loved her answer abt the $20. Id go for an earl grey latte and off to some fabulous little local bookstore. Tipping musical buskers is also a must 🙂

LOL. That’s a great idea, Jenn!! Now I”ll be up all night composing the Duke & Ian song in my head. There are some great buskers in San Francisco, and others you want to pay to just stop. LOL.

Great interview. I can’t wait to read. Thanks for the giveaway.