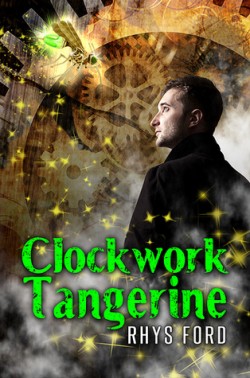 CLOCKWORK TANGERINE may be novella sized but it still packs quite a punch with its vivid imagery and unique worldbuilding. Steampunk to the extreme, readers will get a heavy dose of Rhys Ford’s imagination with this story! ~ Under the Covers

CLOCKWORK TANGERINE may be novella sized but it still packs quite a punch with its vivid imagery and unique worldbuilding. Steampunk to the extreme, readers will get a heavy dose of Rhys Ford’s imagination with this story!

Marcus, the Viscount of Westwood, encounters a beating occurring on the streets of St. Francisco. As his duty, he intervenes, scaring off the young bloods and helps the poor man who has been so injured, he can barely walk. It isn’t until later that he discovers the man’s true identity.

Despite the realization, Marcus has a steel mind and doesn’t allow Robin’s guilt and past affect his feelings for him now. Though slightly falling into the instalove category, I still found that Robin and Marcus were able to work between what stood in their way well despite the tighter word count. The conflict that Ford chooses for this story is very complex and really needs the time to develop. I wished this story was longer so that we could have seen that played out.

You can tell that Ford allowed her imagination to go wild with this story. With the Chinese ghettos and the Empire, CLOCKWORK TANGERINE will really appeal to readers who enjoy steamrpunk romances. I feel like this world has so much room to explore.