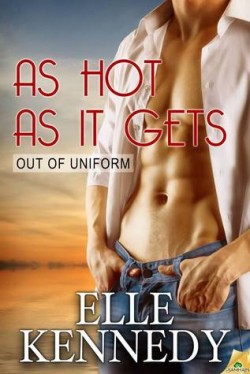 As Hot As It Gets
by Elle Kennedy

Drenched in sensuality, Elle Kennedy’s Out of Uniform series is evocative and sinful, getting hotter and hotter with each new instalment. Even as the series comes to an end, Kennedy holds readers captive until the final, sizzling scene in AS HOT AS IT GETS.~ Under the Covers

AS HOT AS IT GETS is book ten in the Out of Uniform series and it’s also the last one! *sobs* I absolutely adore this series and experienced a bittersweet feeling when it all ended. Elle Kennedy has a fabulous series on her hands. If you haven’t tried it already, you are missing out on some intensely hot sex scenes, fabulous and fierce heroines and heroes that are just to die for! I’m told that the spin off series will be just as fun so I’m excited to see where Kennedy ventures next!

But back to this book… If you’ve read the freebie short available called A LITTLE BIT OF HOT, then you’re already familiar with smooth-talking Texan, Jackson Ramsey and his unfortunate – but hilarious! – encounters with women. He first meets Mia when she is digging through a garden, trying to locate her missing phone. Filled with playfulness and a combustible sexual tension, this book starts off on the right footing and takes off from there.

One of the immediate things I noticed and loved about this book is the characters. Jackson and Mia just exploded from the pages for me. Bursting with personality, the both of them are fabulous individually and I found myself genuinely enjoying myself as I read about them. Mia has a lot of responsibilities on her hands. As she runs her own business while also caring from her teenage brother, she doesn’t have much time on the dating scene. However, upon meeting her, Jackson finds himself half in love with her already and will anything it takes to see her again – even if it means hiring her gardening company just so he can try asking her out again.

Another thing I have to mention is the pacing. Kennedy really has a tight game in this book. Everything flows so wonderfully, making each scene feel so seamless. Once you start, it’s almost impossible to stop.

Drenched in sensuality, Elle Kennedy’s Out of Uniform series is evocative and sinful, getting hotter and hotter with each new instalment. Even as the series comes to an end, Kennedy holds readers captive until the final, sizzling scene in AS HOT AS IT GETS.

Hope you enjoy it ladies!