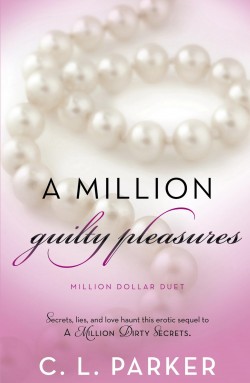 “As with A Million Dirty Secrets, I enjoyed this “billionaire” romance but what makes this different is that Ms. Parker does not shy away from making their relationship simple.” ~ Under the Covers

A Million Guilty Pleasures takes off shortly after A Million Dirty Secrets has ended. Noah and Lanie’s contract no longer exist and nothing is holding them back from having a real relationship. However, Lanie’s mother is sick, and now there is a threat that their Dirty Secret will be revealed. It seems so simple if they just go out with it, but there is a lot at stake. Noah and Lanie are determined to overcome this and ending their relationship is just not an option.

As with A Million Dirty Secrets, I enjoyed this “billionaire” romance but what makes this different is that Ms. Parker does not shy away from making their relationship simple. There is no tug a war of emotions; Noah and Lanie knew what they wanted and they just went for it. Yes, there were hurdles, but the emotions were laid out for you to see. I love both their honesty and the willing to work things out to be together. And as far as steam factor, there are plenty in this book. I would say, even steamier this time around. I have to put in a warning; there are toys included in their play as well as oral and anal play. Noah certainly is teaching Lanie the ropes.

I love that there are different points of views (POV). Lanie’s thoughts cracked me up. I think her fear of “Death by Cockstragulation” was pretty funny. Her referral to her “cooch” as a 3rd person was also funny, though she mentioned it a bit much. Hearing Noah’s POV was heartwarming. It was nice to hear thoughts of a billionaire actually have a conscience. David’s POV was very entertaining. That bastard really is very arrogant, and his POV just revealed how much of an A-hole he is.

I sometimes like when there are multiple povs…..thanks angela