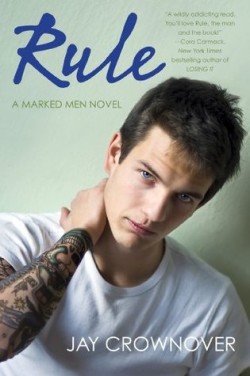 “…there’s still enough sexy bad boys there to make my heart beat fast.  And Rule is definitely at the top of that list!” ~Under the Covers

I was not expecting to like RULE as much as I did.  Don’t know why because this book came highly recommended.  Well, I do know why, I tend to stay away from new adult unless it comes recommended by trusted people.  And even then, I’m weary.  RULE read more like a contemporary romance than a new adult story.  And that had a lot to do with the fact the characters are pretty mature for their age.  Then again they’ve been through a lot.

First there’s Rule.  He’s been always put down by his family because he looks different.  He’s a tattoo artist, wears his hair in a mohawk which he colors based on his mood, sometimes it’s pink.  He’s got tattoos everywhere and some things are pierced. *wink, wink*  That’s not the norm his family want to see.  He had a twin brother who died in an accident.  He was the perfect son.  His other brother is in the military.  So Rule is the odd man out.  His relationship with his family is strained at best.  And the only reason he puts up with seeing them is because childhood friend Shaw Landon makes it her mission to bring Rule home every week.

Shaw comes from a wealthy family that has never given her the love she needed.  So she’s been adopted into Rule’s family.  Especially being that she was dating Rule’s twin for years.  Or was she really?  Shaw has had a crush on Rule since she could remember but he never pays her any mind.  Until one night where she just goes for it with some help from alcohol.

There’s a bit of suspense element in the story when Shaw’s perfect society ex boyfriend turns crazy stalker.  I thought that was interesting, although I don’t think the story needed the extra drama.  I was completely sold on the main story developing.  The acceptance that both Rule and Shaw had to come to.  Their relationship which was at times combustible.  I think this group of guys looks tougher than they really are.  But there’s still enough sexy bad boys there to make my heart beat fast.  And Rule is definitely at the top of that list!

Thanks for the review Francesca…need to check this out

I really enjoyed your review, I’ve been torn on reading this series because it seems to either be a love or hate or with no in-between.