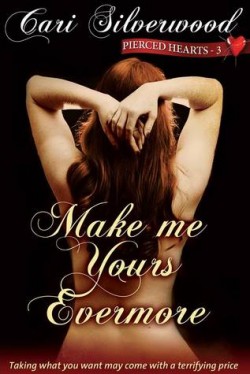 Make Me Yours Evermore
by Cari Silverwood

“The interplay between the two makes the sex SO hot.” ~Under the Covers

Make Me Yours Evermore is the third installment in the Pierced Hearts series by Cari Silverwood and one I was highly anticipating due to the almost painful cliffhanger at the end of book 2.  Kat is an irreverent sub that accountant, Chris, has been fantasizing about and obsessing over for years.  When Kat’s increasing curiosity threatens Chris’ partner, Klaus, he decides to take matters into his own hands.  If you want to know how this is all set up, you MUST read book 2 (I highly recommend it), but suffice to say, if she continues to pry into past events, it could mean criminal charges and a lot of headache for all.  Chris knows that Kat needs reigning in, that she’s made to be a perfect slave.  She just needs some convincing.  He decides to kidnap her and bring her to an island hideaway for training, but his friend Andreas gets mixed up in the adventure.  Add to that a chill-inducing housekeeper and the entrance of legitimate human traffickers to the mix and you have a BDSM capture fantasy sprinkled with more than a hint of suspense.

First off, I have to say that Kat is a character I actually loathed a bit after book 1.  She took things too far, so I was interested to see how she responded to Chris’ rough treatment, his ultra-sadistic side.  You really know what’s occurring on the page is soooooo wrong, but Kat’s responses show she’s more of a willing participant than she lets on.  She’s a hard nut to crack though and when she turns and hands over her submission I was pretty shocked!  Chris is a mix of sadist with just a HINT of soft.  For those that want a Dom who lays on the mushy side when play is over you might find him too hard for your tastes.  He’s balanced by Andreas, who I saw as a double for the readers’ conscience.  He’s the devil and the angel both arguing on your shoulder, trying to reconcile what you see before you.  He, like us, enjoys it more than he wants to admit initially.  You can find for yourself who wins that internal battle.  A friendship and potentially their freedom hang in the balance.  The interplay between the two makes the sex SO hot.  There are a few m/m/f scenes that melt the page.

The plot is complicated by the entrance of the TRUE criminals, the perpetrators of sex trafficking.  We meet Zoe, a victim whom Kat takes a liking to.  Be prepared for some f/f action that is scorching in its own right.  The sex traffickers bring some nail biting suspense to the happy threesome and I appreciate how it drives the plot forward and sets up book 4, which was done nicely with another crazy cliffhanger!  Contrasting Kat’s predicament, in all its dub-con glory, with criminal human trafficking, was a gutsy move.  As a reader, it asks us to question non-consensuality that is “ok” vs “not ok”.  Even if this wasn’t the author’s intention, I couldn’t help but weigh that in my mind, at least as far as what I could tolerate in erotic fiction, and what turned me on.   The melding of the two worlds via Zoe might disturb some a bit, so I think this installment deserves fair warning for that.  I love the author’s changing perspectives and I think this helps to balance out some of the emotions that might be evoked had it all been in “Dom” view.  I’ve loooved this series and can’t wait to see how Zoe’s future becomes intertwined with Chris, Andreas, and Kat.  Kat’s Domme side needs to shine, but Zoe may initially have other plans!

Ugh hate cliffhangers…but if I start reading now and take breaks between books I amay be done by the time the next book comes out!….thanks jennifer

I love the review! Thank you, Jennifer.
But I should point out it’s more a sneak peek at the next book than a cliffhanger. It could easily be just Chapter One of Book 4. All the core issues in this book are resolved.
I’ve made a note to not tack these on as an epilogue in future so as to avoid the cliffhanger label 🙂