With each book in my Pierced Hearts series I’ve aimed to go a little deeper and darker into capture fantasy, a subgenre that has been much loved by women since the dawn of the bodice ripper and, I’m sure, well before that. In these stories, there’s a man who takes control and seduces a woman even though she says no, but we the readers know that in some way she is saying yes.

If you’re someone who worries about the morality of dubious consent in fiction, go here, to Women24, where I discuss it.

Though one comment from Women24 sums it up: Painting scenarios that are fictional is no more advocating rape than describing a murder is advocating murder.

I’m happy to write dubious consent stories. I like them – I like reading them as well as writing them. But with the writing of Make me Yours Evermore, I think I’ve found some of my limits. Some of it bothered me as I wrote it.

I’m always aware of juggling the darkness and depravity of anything happening in these stories with the elements of good. I try to make the woman someone you can empathize with, but also the men need to have some elements of good, so you may also empathize with them. Never ever do they see the woman as a disposable thing. There is a connection, they care for her, and the men often have other good aspects too.

So why did this book bother me?

I had to self-analyze myself, a lot. It’s partly because of the level of non-consent in some of the sex scenes in combination with how the men seemed at that point in the book.

Non-consent in fiction means the woman is pretty much saying no, and meaning it in her head too. When I look back at Bind and Keep me, many of the earlier sex scenes begin as non-consensual ones but they change as Stephanie is seduced into liking what is happening to her. This is where the forced seduction label comes from. It’s a classic scene for bodice rippers.

Here’s where a minor difference did things to my head. The first time Kat is forced to have sex, she does enjoy it by the end, but the men to me are mostly just doing what they want to due to lust. It’s almost a punishment for Kat. There aren’t a lot of previous hints about her being attracted to them – some, but not a lot. For me, that made it a real squirmy, squicky scene to write. For all my beta readers, bar one, the sex scene was perfectly fine.

It underscored for me how blurred is the line between what we like to read and what we don’t. I normally run on instinct for these books. This time I had to tune in to what my beta readers and Sorcha Black told me to know I was on the right track.

I’m certain this book is going to disturb more readers than my previous two did.

Yet strangely, even though my next one, the unwritten Book 4, is darker in some ways, and will have exhibitionistic forced sex in it where people pay to watch, I’m looking forward to writing it. Why? Because I know the man, the hero. And in this one he will be a hero. Because he will be her knight in blemished murky white armor. Even with his criminal past, the man has morals, and he cares deeply for her. For me that makes this a delicious story to write.

Who is he? You’ll have to read Make me Yours Evermore to find out. 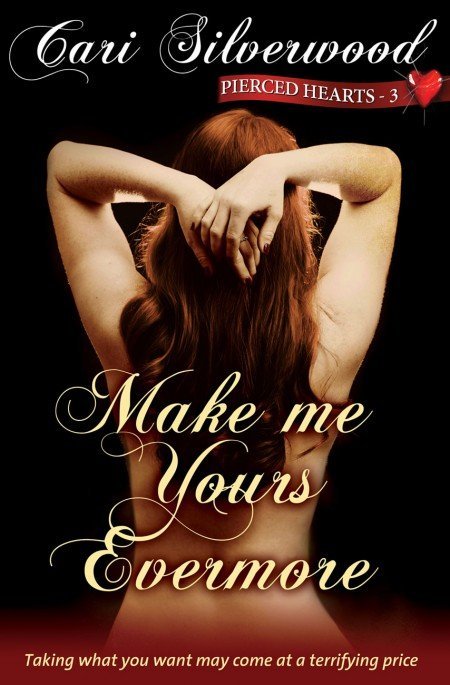 Taking what you want may come at a terrifying price.

Chris calls his darkest, nastiest fantasy into the light of day when he has to kidnap Kat to save a friend. For years, he’s wanted to bring her to her knees.

But claiming her draws attention. Andreas wants to save Kat, until he sees her response to raw male dominance.

More dangerous are the human traffickers, who regard the acquisition and selling of women as a very high stakes business. And they’re watching. Everything.

Death. The perversion of love. The loss of freedom.

Sometimes there is no choice.

Embarrassment had reached new depths. It was one thing standing in a room naked and getting whipped by a Dom you’d selected carefully and teed up your limits with. I had control over that. But this? Kneeling on the breakfast counter with my hands behind me and basically chained to the wall while wearing a wet, milk-soaked scrap of a dress?

I wanted to sink into the floor. Even more so since I knew having them do what they’d done – stared and treated me like a pet they had to feed, had turned me on so much I was afraid to open my legs. I could feel how slippery I was down there.

When Andreas excused himself and wandered off down the hallway to the toilet I relaxed some. One gone. Maybe now, I’d get freed. I braced myself for the evil I had to do, begging from him… Then I raised my eyebrows, in a hopeful fashion, at Chris.

He deadpanned back at me.

Shit. Did I have to whine? I was not whining. But I wasn’t game to speak. Chris’s suggestion of a piñata and the crocs hearing my beating had been ominous.

The stool scraped on the floor as he stood.

I managed a forced smile when he came to the counter and hopped up on it, sitting next to me with his legs dangling over the edge.

“You were very, very good,” he drawled.

I blinked and tried to stamp down on my awareness of the difference between him, free, a dominant man and inches from me, and me tied up. It was electric. Chris was the epitome of alpha male. In the past, his pale blond man-god good looks had always steamed up my female sex goggles in milliseconds. I couldn’t help holding my breath and giving my lower lip a tug with my teeth. Pure body reaction, I reminded myself, I still hated him. I did, I did.

His slow perusal of my breasts and the trail of milk and cornflakes down my belly made me both melt into a sizzle of goo and want to snap out something like…like, I’m not your breakfast. Noo. God no. Need a spoon? Fuck no, not that either.

Surreptitiously, I twisted one wrist, praying it was loose.

He spotted that movement and his mouth curved. “It’s amusing, Kat. Watching you. Watching you and knowing I can touch you without you doing anything to stop me. Knowing you’re aroused too.”

“I’m not aroused,” I ground out through my teeth. “Andreas will be back soon!” My glare would hopefully turn him to ashes.

“You speak?” Gently he began to roll the dress up my thighs. I tensed and squeezed my thighs together. “Uh-uh. No hiding there. Open.”

I glared some more.

Chris moved in and nipped my nose. Shock hummed through me as his other hand wrapped around my breast, squeezing tight. Big hand, hard grip, small pains that did things to me. I squirmed on the spot.

I hated possession like this – the casual owning of a woman bothered me, especially if it was me. But with his hand on me there, and the wrist bondage, with my arms pulled back out of the way, I had nowhere to go. Fuck. Hate you Chris.

Yet what he did fed heat into my groin.

I snapped them open. Crap. I’d closed them without meaning to.

“I knew you were turned on because you’ve dripped on the counter.”

Mild panic to mortified in one second flat. Knowing he’d seen my moisture coming from me… I stared at him. Amusement, lust, and the satisfaction of a Dom who’s hit the humiliation and torture button flickered across his face.

His thumb swept over my breast teasing my nipple as he added in a matter of fact way, like it was a done deal. “I’m going to make you come now, Kat. If you don’t want Andreas to see, be good. If you’re bad, I can stretch this out forever.”

To join Cari Silverwood’s MAILING LIST and keep up to date with her upcoming books go to: www.carisilverwood.net/about-me.html

Cari is giving away a Signed print copy of both Take Me, Break Me and Bind and Keep Me and a $20 Amazon Gift Card. Winner will be selected by Rafflecopter.

i love the romance and love and just the dom. thing that happens

I just love the dom! Thanks!!

i am in love with the doms.

I love the except and the synopsis of the book.

im in love with the doms. thanks for the excerpt and giveaway 🙂

Looking forward to reading this series. Great blog, excerpt and giveaway, thanks.

I love the dominating attitude of the male characters and the steamy scenes! 😉 Thanks for the giveaway.

I love that they re dark, dangerous and a little rough. It adds so much more intrigue and excitement.

I’m not really sure why I like them, I just do.

Like you, if I know the hero and the heroine it’s an easier read

A little danger is nice to read about while being all safe and cozy.

Yes, I like the darker fantasies. You write them well. I look forward to reading this one. Thank you.

What I like about the dub consent and capture fantasy is that they are fantasy. I am not sure I would want them to truly happen to me, but reading a story. . . It is like watching TV. You know it isn’t real, but you can enjoy it anyway.

My wife likes the super steamy parts. Which makes me like them if you know what I mean. 😉

Monthly Wrap Up: January 2014 | Under the Covers Book Blog