Join our newsletter to be the first to hear our latest news! Learn More
Home / Reviews / ARC Review: The Spider by Jennifer Estep 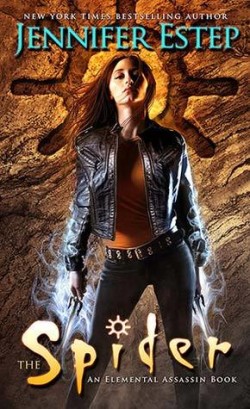 Estep manages to add another layer to the multi-faceted character that is The Spider. ~ Under the Covers

THE SPIDER, book ten in the Elemental Assassin series is hands down the best of the series yet! I devoured this book, becoming wholly consumed in the story that Estep brought me on. Taking a step back from the life that Gin has created for herself, Estep reveals a vivid and interesting story that occurred years ago and has played a crucial part in what Gin has become today.

The Spider hasn’t always been to untouchable and all-mighty. This time, we see a softer side of Gin when she was just starting out as an assassin. In what was meant to be an easy takedown, Gin soon realizes that complications have twisted this sick case into something far more deadly.

She is hired to take out a money mogul who also happens to abuse his daughter, Charlotte. Nothing pisses Gin off more than a man who preys on the weak. To get close to her target, Gin saddles up to his gorgeous son, Sebastian Vaughn. However, Gin makes a fatal mistake. She falls in love.

In a matter of weeks, Gin’s life brightens again, helping her remember a time when she wasn’t so angry at the circumstances of life. Sebastian brings warmth into her world. It’s actually quite nice to see this side of Gin. She’s often portrayed at the tough, take-no-shit type of character. I liked seeing her vulnerabilities. In a way, I think her love for Sebastian made her more real. She isn’t so cold-hearted and ruthless, but capable of love. Estep manages to add another layer to the multi-faceted character that is The Spider.

But make no mistake, Gin isn’t all mushy in this book. As you will see, several twists and turns are prevalent in this storyline, throwing me for a loop each time. I don’t think I muttered, “Oh my God,” so many times during a book. Estep executes her plan flawlessly. I’m very impressed by the way she was able to pull this off.

The way in which this book is written showcases Estep’s talent as a writer. Eloquent and free-flowing, her writing matches the fast pace of her books.

And when the world fell away, and the stars flashed before my eyes, and I finally came back to myself, I almost wanted to weep, knowing that this would be the first— and only—time that we would ever be together

I found a lot of the Gin we see in this book reminds me of any normal young adult, itching to get out on their own and prove themselves. The whole falling in love part made me so mad for her. I wanted to crush him and I am so glad she got to do what needed to be done. He deserved everything he got and more.

Over the course of the series, there’s been so much change in Gin already. I really felt in this book, we got some insight into her character that we have never seen before. Also, I love that she fell in love in this one. It makes her feel more real.

I like the more recent books in the series the best.

I need to read this series…Thanks for the review Annie

Thanks for checking it out