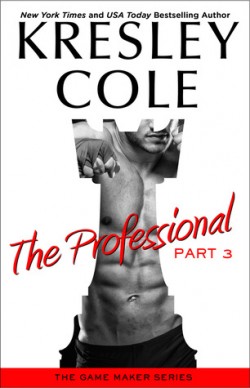 The Professional: Part 3
by Kresley Cole

I need a tall glass of ice cold water to cool off, or even better for Sevastyan to climb out of my kindle and ravish me until I am too limp to think or move~ Under the Covers

This is the third and final installment of the The Professional, the first book in The Game Maker series and it is make or break time for Natalie and Sevastyan. Can Sevastyan see to Natalie’s emotional needs as well as her physical ones or has his dark past broken him to any emotional connection?

After reading The Professional: Part 3 I need a tall glass of ice cold water to cool off, or even better for Sevastyan to climb out of my kindle and ravish me until I am too limp to think or move. I don’t think I am alone in that thought Sevastyan’s dark intensity and savage good looks seem to have captivated everyone, his charisma bursts from the pages and has enthralled us all. This also means that Natalie’s lighter personality really shines, her humour and almost mischievous nature contrasts really well and I loved reading this book from her POV.

The only issue I had with this book was that it was all resolved really quickly at the end, everything has has had a great build up of tension, but the resolution seems to have been hurried and it made it seem very artificial. I think this could have benefited from another installment as the quick fix they did at the end didn’t feel right.

But, as a whole The Professional  was fantastic. It had a truly memorable main couple with off the charts chemistry, this is definitely become one of my favourite books by Kresley Cole and I can’t wait to read all the installments together! Bring on The Game Maker #2!

Thanks for the great review Suzanne.

This review is exactly what I thought of the book! The tension build up was excellent but needed a more drawn out resolution!