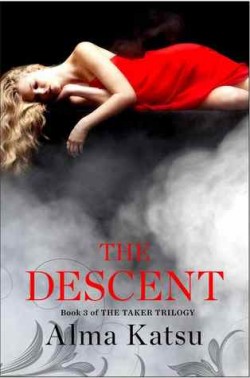 The Descent
by Alma Katsu

“Ms. Katsu is an exquisite writer with a vivid imagination. The Taker Trilogy is not to be missed, and I’m a bit sad it had to end.” ~ Under the Covers

Alma Katsu’s The Descent is one of my most anticipated read since reading The Reckoning in 2012. This novel is the last of The Taker Trilogy, and I must say, Ms Katsu did an AMAZING job.

The journey that Lenore, Adair and Jonathan and even Luke has come to an end. Jonathan and Luke are where they are destined to be. Adair is at peace with his life though still longing for love. Unfortunately, Lenore will have to take one last journey before she can finally be at peace. She will ask Adair to send her to the Under World to look for Jonathan. In this journey she along with the fans of this trilogy will find out the true roots of their immortality.

Ms. Katsu’s book of heartaches, loss and obsessions had taken an expected turn. It is now full of forgiveness, resoluteness and true love. All my opinions about the protagonists had also taken a turn. I have now fallen deep in love with Adair. This man will go to the ends of the world to find his love and to boot, he would give up everything for her. Hands down to Ms Katsu into turning a vindictive and ruthless man into a loving one. And as far as Lenore, I am glad that she finally came to terms with her life. She no longer seeks love as if it was her lifeline. It was nice to see her finally get peace after a very long life of heartaches. The rest of the characters of course made there cameos. Ms Katsu had also put a satisfying end to their stories though some may have been bitter sweet.

The Descent had an interesting take on the afterlife, the Underworld, and it’s connection to Greek mythology. I was absolutely intrigued. The long awaited last adventure of The Taker Trilogy was worth the wait. This series and its characters has marked a place in my heart and will always be on top of my recommendation list.

My only quibble is the ending of the story. The ending is not bad by a long shot. Adair and Lenore finally got their happy-ending, and this was long overdue. However, after all this time with their obsession with immortality, their ending seemed…well, not what I expected.

If you ‘ve read The Taker and The Reckoning, you know that the ending in both novels were a cliff hangers but had ended in such a big way. Well, both books were amazing including this one. In this novel though, the ending did not have that wow-factor. I was expecting a monumental ending that would leave my jaw dropping to the floor. Unfortunately, it did not. I’m not sure if it was because of the long wait for this book or I simply expected too much from it.

Regardless of this ending, my rating stands strong. It did not hinder my opinion of this book or the series. Ms. Katsu is an exquisite writer with a vivid imagination. The Taker Trilogy is not to be missed, and I’m a bit sad it had to end. I am looking forward to reading Ms. Katsu’s future novels.

Alma Katsu's debut, The Taker, has been compared to the early work of Anne Rice, Elizabeth Kostova's The Historian and Diana Gabaldon's Outlander for combining the historical, supernatural and fantasy in one story. The novel was named a Top Ten Debut Novel of 2011 by the American Library Association and rights have sold been in 16 languages. The Reckoning, the second book in the trilogy, was published in June 2012, and the third and final book, The Descent, will be published in January 2014. The Taker Trilogy is published by Gallery Books/Simon and Schuster and Century/Random House UK.

Ms. Katsu lives outside of Washington, DC with her husband, musician Bruce Katsu. In addition to her novels, Ms. Katsu has been a signature reviewer for Publishers Weekly and an occasional contributor to The Huffington Post. She is a graduate of the Master's writing program at the Johns Hopkins University and received her bachelor's degree from Brandeis University, where she studied with John Irving. She also attended the Squaw Valley Community of Writers.

We have 3 paperback copies of THE DESCENT up for grabs.  US only.

Makes me want to read

Thank you for the review and the giveaway!

Sounds good to me!

book sounds good thanks for the review

Thank you for sharing, I can’t wait to read this one! I appreciate the chance to win 🙂

thanks for the awesome review and giveaway! I’m so excited cuz I’m finally starting this series 🙂

Sounds like my kind of book, thanks for the chance.

It looks like a great book and I do enjoy a happy ending.

Ah, I can’t wait to read this. LOVE the series!

I loved the first two books in the series. I have eagerly awaited this one. I’m glad to see that for the most part it didn’t disappoint. I’ve always been up and down about Adair so to see he redeeming himself will be interesting.
Thanks for the giveaway.

I’ve have been anxiously awaiting the final installment to The Taker trilogy for so long!! The first two books had me absolutely captivated. They were so well written that they seemed like a historical retelling and not a tale of fantasy. I am totally invested in all her characters but with Adair, Alma Katsu has written one of the most fascinating and complex characters that I have ever come across. I’m dying to see how everything will play out for Adair and Lanny. And when the Underworld was added as new element, I just knew that the finale was bound… Read more »

Read the first sentence of the spoiler section and am wondering about the ending….thanks angela

I can’t wait to read the last novel in this series! Thanks for the giveaway!

loved the review, can’t wait to read this book. Thanks for the giveaway! Happy New Year!

Great review! I look forward to reading it. 🙂

I have the first two books on my TBR shelf right now so time to start this trilogy as I can read the books back to back,

This is the 2nd book this week on my TBR list that is #3 in a series. I need to get back to my books! Thanks for the giveaway.