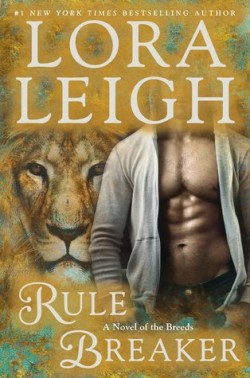 “Lora Leigh can write a sex scene like no other!  If you are looking for heat, then prepare to be burned…” ~Under the Covers

Rule Breaker has been the reluctant breed.  He swore he would never take a mate and run far away from Mating Heat as possible after seeing her mother dissected by scientists that were trying to understand that phenomena.  He’s always extremely cautious when he’s around a female, and he’s been extra cautious around Gypsy.  He’s known her since she was 15 and he rescued her from a Coyote Breed that almost raped and killed her, but who did take her brother’s life.  He’s been secretly watching over her since.

I’ve had a fascination with Jonas’s men for a while.  Probably because to work for that ruthless man you must be pretty damn kick ass yourself.  And just as I enjoyed LAWE’S JUSTICE, I enjoyed RULE BREAKER quite well.  I still don’t think this series has recaptured the interest that I had in the earlier books, but the stories are sort of more complex now and I think we finally got some answers (even if it felt in a rushed way) in RULE BREAKER.

As for his mate, Gypsy…Well she was just ok for me.  I liked the fact that she was fierce enough to try and spy and gather info and do the things she was secretly doing while covering it up as being a party girl.  Not a wilting flower for sure, but yet again, a virgin heroine by Ms. Leigh.

But when it comes to the sexual chemistry between Gypsy and Rule, well…. Lora Leigh can write a sex scene like no other!  If you are looking for heat, then prepare to be burned because Rule and Gypsy are hot!

There are so many other elements to this story that were of interest to me though, the side characters especially.  I kept wanting glances of Dog and… Dane.  Dane, my love, you broke my heart.  From what I’ve seen he’s not supposed to get his own book, but he needs an HEA.  Please!  And then there was a brief moment of Cassie and a different side of her life we don’t usually get to see.  My heart broke for her as well and the life she’s had to lead.

When I talk about side characters I can’t leave out Gideon!  Who he is, what he’s done.  I can’t wait to delve deeper into all that and keep discovering new things about him.

This book filled with a lot of unnecessary information though.  Things were dragged on and excessive detail was given were it wasn’t really needed.  It might’ve been cut by at least a third and maintained the story going.

Although I don’t think this is the strongest book in the series, it was a great stepping stone for what’s to come and to close out some older chapters that have been lingering around for a bit too long.  I’m actually excited to see what comes next.

We have a copy of RULE BREAKER up for grabs!  US only.

Fave breed is Tarek Jordan…I’m so behind on this series it’s not even funny.

This is one of my favorite series. I have to pick a favorite…I guess it would be #4 Kiss of Heat and Kane Tyler (& Sherra) but then there’s Dane. Man so many awesome Breeds to choose from. I love the felines the best though. I’m glad she’s progressing the story…it was kinda nothing for a while but I love my breeds, sigh. Thanks for the giveaway. I’m on a waiting list for the Library’s copy, sigh.

Great review! I’ve been looking forward to Rule Breaker. As for my favorite Breed I’d have to go with Mercury.

i would have to go with Mercury also. i really LOVE the series im excited to get the chance to read rule breaker

I haven’t had the chance to read this series yet. Checking it out.

I’m behind on this series but I did also really love Mercury. I can’t wait to catch up on them and read this one.

I am just starting this series but would love to read this one. Thank you for the chance.

Sounds like a great book! I haven’t read anything by you yet and this series sounds good! I love UTC’s quote “Lora Leigh can write a sex scene like no other! If you are looking for heat, then prepare to be burned…” ~Under the Covers

Makes it even more intriguing!!!

Thanks for the chance and congratulations on the new release!

This my ULTIMATE favorite book series EVER!!! I love the last one just as much as the first one but the spicy scale has definitely decreased. I’m a little sad about that because no one could write breed spicy as well as Lora Leigh. I still look forward to the new books though 😉 Great review! Thank you for the giveaway!

this does sound interesting! This is the first I’ve come across this series and I’m definitely going to be checking it out 🙂 Thanks for sharing!

Don’t have a fav; haven’t read it

Haven’t read this series yet ….thx

I love the Breed Series. I cannot wait for Rule’s book.

I’m behind reading the series but my favorite so far is still Del Ray Delgado. Thanks for the review

Yeah, Mercury is my fav also.

Mercury is one of my faves for sure.

I’m also very very intrigued by Cassie — I can’t wait for her story.

I hope this book moves us closer to Cassie and hopefully Dog’s story.

I can’t wait to ready this one! Love the Breed series!

Love Jonas! And I’m dying to have Cassie’s story!

I love all of Lora Leigh’s books, but especially this series. I am really looking forward to reading Rule Breaker.

I have to say my favorite is Dash from Elizabeth’s Wolf just because that was the first Breed book I ever read. He’s the one responsible for introducing me to the world of the Breeds. 🙂

mercury is my favorite

Wow! I’m surprised I’m not seeing more love for Jonas (I love that little lion) But Mercury was a great book. I may actually still have Dawn’s Awakening as one of my fave books in the series, if not my fave. ~Francesca

It’s hard to choose just one favorite. Mercury and Jonas are at the top of the list but so is Dane. I want Dane to have his own book, I mean, it’s only fair he gets his own HEA!

Hard to pick one. I love Tarek and Mercury.

Mercury and Jonas have been my favorites. So many great characters. I agree also that she writes some of the best sex scenes ever.
Great review.

I’ve not read any of Lora’s books. However, this sounds like a great series and will be checking them out. Thanks for the giveaway.

I like all of the breeds but one of my favorite is Tanner.

I don’t have a favorite yet.
Thanks for the chance to win!