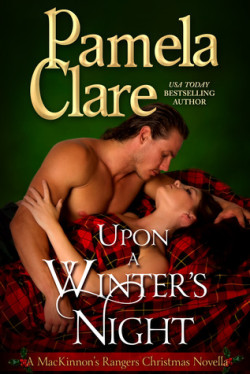 Upon a Winters Night
by Pamela Clare

“There is no doubt that Ms. Clare is a phenomenal writer. But it’s with her historical novels is where I love her work the most. She can bring history alive and let me experience them up close and personal with the characters she had created.” ~ Under the Covers

There is no doubt that Ms. Clare is a phenomenal writer. But it’s with her historical novels is where I love her work the most. She can bring history alive and let me experience up close and personal with the characters she had created.

Upon a Winter’s Night takes place shortly after Defiant had ended. The MacKinnon brothers are settled in their home with their wives and children. But their work is not done as Rangers. They had set out to help their comrades with issues after the war. I guess we can compare their work to the programs to help our veterans in present time. They are honorable through and through. They are also now dealing with their HEAs (happy-ever-after) with their family as Christmas approaches. Their gifts and expectations from each other humbles me and reminds me of what Christmas really means.

We get a good amount of Iain and Annie, Morgan and Amalie and especially Connor and Sarah. Connor and Sarah are having marital issues, but no worries, they work things out. Sara is still dealing with the loss of her uncle. Though William Wentworth is still alive, he refuses to show himself to Sarah. While he played the villain in the MacKinnon lives for some time, he had won the hearts of many readers when he proved himself worthy at the end of Defiant. It was a magnificent act of love and bravery. And he will make another decision here that will prove, yet again that he is a good guy. He knows he’s made a mistake and trying to make up for it. We also get a bit of Killy as he gets his HEA, a funny and very sweet story. Joseph is still with the MacKinnons and truly a part of their family. His story is also promised to Ms. Clare’s fans and most likely next up. And after, it will be Wentworth’s story. I can’t wait to get more of this series and I’m hoping they come sooner than later. =)

I have this in my “Christmas days” shelf and I can’t wait to read it. I’m so happy she’ll write Wentworth and Joseph’s stories
Great review Angela

Thanks Aly, Much appreciated!!! ~Angela

Thanks for the great review Angela.

Elizabeth, I am just like you. Love her historical. =) ~Angela