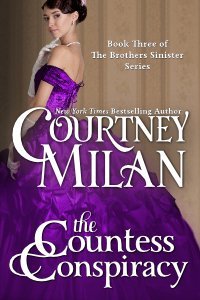 The Countess Conspiracy
by Courtney Milan

“Smart and unconventional historical romance, packed with emotion and broken hearts.  Just superb!” ~Under the Covers

Courtney Milan has a talent for telling beautiful historical romances that are not like the norm you can find milling about.  Her characters have depth are will never be cut from the same mold.  THE COUNTESS CONSPIRACY follows in much the same fashion, and while we have the terrible supposed to be rake, Sebastian Malheur, whom we’ve met in the previous book in the series, we have an unexpected heroine for him.

See, he’s really not the author of his scientific experiments.  He’s just the show puppet.  The real mind behind the discoveries is a woman.  A woman who couldn’t come out and say her name because then everything she had found wouldn’t even be considered because of the mere fact she’s female.  She’s also Sebastian’s childhood friend, Violet.

Sebastian and Violet have been best friends their whole lives, always there for each other.  But where Sebastian has always been in love with HER, she’s always denied that she cared because she’s had to close herself off.  Enduring a loveless marriage that left her more than scarred, and a family who always put her down.  Having love, or Sebastian, never crossed her mind. But that all comes to a head now that Sebastian doesn’t want to continue with being the fake he has been until now.

I sincerely loved everything about this book.  I devoured it with a passion.  The complexity of her character and how she was able to slowly peel back those layers of protection she built throughout the years.  And for us, the reader, to discover the depth of Sebastian’s love.  To see the pieces of the puzzle fall in place.

Smart and unconventional historical romance, packed with emotion and broken hearts.  Just superb!  I’ve also come to expect in Ms. Milan’s books to have a huge betrayal, that may seem you can’t come back from.  I don’t think this big event was present in this book.  Yes, there are obstacles they have to get past, but nothing as big in my opinion as her previous books.

Nonetheless, Sebastian and Violet worked hard for their love to be.  And the path that got them there was an enjoyable one to walk with them.  I’m a glutton for Ms. Milan’s stories and I can’t wait to read another one…and another one.

Adding to my wishlist…Thanks Francesca.

I just got two of the previous books in the series on a recommendation. Glad you liked this one. I look forward to getting to it.

ARC Review: The Suffragette Scandal by Courtney Milan - Under the Covers Book Blog