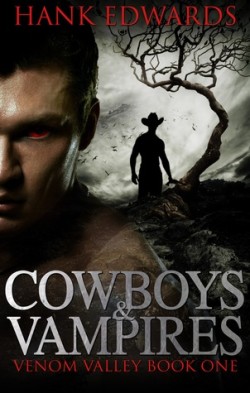 Cowboys & Vampires is like no other book I have ever read.  It is an old time Western – the first I’ve ever read – but it incorporates so many elements of books I do love to read: paranormal/fantasy, suspense, male/male romance and a new but solid love.

Josh Stanton lives in Belkin’s Pass, an old western town, where his adoptive mother, Agnes, took him in and cared for him since he was a small child.  But strange things have been happening to him recently and he can’t explain what it is or why.  After finding Agnes’ dead body, Josh realizes he’ll be implicated in her death, so he decides to flee the town. As the Sheriff’s Deputy, his best friend, Dex Wells, needs to decide what to do: should he go after Josh and take him into custody, or should he let his friendship prevail and help Josh get away safely?

Meanwhile, other mysterious occurrences are taking place in town.  Prostitutes at the local saloon are behaving oddly and the only one to see that something is very wrong is one of their own, Glory.  She quickly discovers that an evil vampire, Balthazar, is the cause of everything taking place at the brothel and that he is turning the others into vampires as well.  Very soon, all of the strange occurrences begin to intersect and so begins the fight for justice, life and love.

Edwards gets the reader wrapped into this story right out of the gate: Josh arrives at his house to find Agnes’ dead body and the action quickly ensues. From that point on I was hooked and it was difficult to put the book down. Edwards writes extremely well his descriptions and details were enticing to me as a reader and I loved all of the suspense and paranormal elements he kept introducing into Cowboys & Vampires.  More so, Edwards wove the tale in such a way to keep the explanation of it all mysterious and taunting – but in a very good way. Without any answers neatly provided up front, I continued to ask myself questions throughout the book. For instance, Balthazar- where did he come from and why is he drawn to Josh? He is definitely not the type of vampire we have come to know and love in our books these days; he is pure evil. Some of these are answered for the reader by the end of this book; however, since this is a series there are some that linger, which I am absolutely fine with that so long as they are answered eventually.

Edwards also writes characters that grew on me quickly-both the good and the bad. Balthazar is an awesomely evil bad guy and he had me biting my nails in just about every scene in which he appeared; I never knew what might happen.  On the other hand, Josh, Dex, and Glory had me rooting for them from the beginning. I was drawn to their uniqueness but also their will to live and to fight evil head on.

And, of course the relationship between Josh and Dex is one of my favorites – friends turned to lovers.  In the midst of everything taking place, these best friends decide to take a chance on a love to which neither was willing to previously admit because being gay back then was never accepted.  But when the odds aren’t looking great and there isn’t much else for which to fight, throwing caution to the wind and letting love prevail seems like a wonderful idea. And it is. The relationship between Josh and Dex is so sweet and beautiful and their time together is full of tenderness and heartwarming love.

While Cowboys & Vampires provides the reader with a plethora of characters, paranormal elements, and events, the primary intersecting plot never faltered. It was all woven together in a very enticing and engaging manner. True to the style of the book, Edwards also left the reader with one hell of a cliffhanger. It’s definitely one to bring me back for more, not only because of the cliffhanger but because of all the reasons leading up to it – an excellent story, a creative world, great characters, suspense, and a beautiful love story that has me wanting more. Cowboys & Vampires is my first book from Hank Edwards, but it surely will not be my last!

His paranormal Venom Valley Series is now available from Wilde City Press with the first book, Cowboys & Vampires, and second book Stakes & Spurs, currently on the market. Watch for more books in the series which follows Josh and Dex who battle vampires and zombies in the American Old West as they realize just how deep their feelings for each other reach.

You have me wanting to read this one. Thanks I hadn’t heard of it.

Oooo I like the xound of this…..I love when a book keeps me guessing…thanks leigh

You’re welcome, ladies! It really is a very neat book. It was one that kept me thinking about it long after reading it. Enjoy!