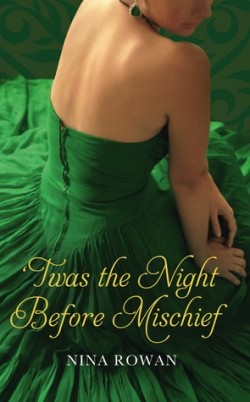 'Twas the Night Before Mischief
by Nina Rowan

While I enjoyed the premise of this holiday tale it left me wanting.~ Under the Covers

Penelope Darlington doesn’t want to be invisible but that’s the way she has felt much of her life after her mother passes away and her father remarries. When she impulsively runs off to Scotland with the intention of marrying her Scottish beau Simon Wilkie, she sets a whirlwind of events into motion unlike any she could have ever imagined.

Darius Hall, the Earl of Rushton, thinks once he returns to town and sees the Darlingtons that Penelope, ever the sweet and obedient daughter of a famous confectioner, will be the perfect wife for him. Darius is soon enlightened the now beautiful Penelope turns her nose up at Darius, who has always seemed aloof and somewhat uncaring to her.When Mr. Darlington finds his daughter missing and on her way to the Orkney Islands he sends Darius to “fetch” her in time for the renowned Darlington Christmas feast.

Darius catches up to Penelope, who has been summarily abandoned by Wilkie at an inn in Scotland and the two commence a journey home that will change each other’s expectations and lives forever.

While I enjoyed the premise of this holiday tale it left me wanting. I wanted to know more about Penelope, more about Darius. Yes, I totally understand that this is a novella and it may be hard to get little details across, but I still would have loved more. I liked the characters a lot and the passion between the pair is quite evident once Penelope opens her eyes to see the man in front of her.

Did you agree with our review? Let us know your thoughts in the comment box below!