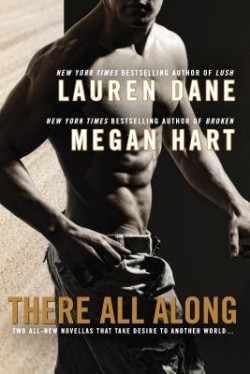 There All Along
by Lauren Dane, Megan Hart

“Both of these stories packed a lot of emotion in such a short amount of time, it never ceases to amaze me how they can do it!  And on top of that, they were hot off the charts!” ~Under the Covers

This anthology contains two standalone (as far as I can tell) sci fi romance stories.  I’ve always enjoyed the sci fi work by both of these authors and, as you probably already know, they are two of my all time favorites!  Both of these stories packed a lot of emotion in such a short amount of time, it never ceases to amaze me how they can do it!  And on top of that, they were hot off the charts!

This story sucked me in from the very beginning.  I loved every bit of it!  It’s sort of a story of forbidden love mixed in with a second chance at being happy.  Verity is a strong woman.  Her family gave her to a much older man when she was just a teenager only to be abused by him.  When he died a few years later, she inherited his business which is sort of a commissary that sells goods and delivers anything the government enforcers bring to their town.  Of course, there’s been a hunky enforcer she’s had her eyes set on for years, but they’ve never made moves on their feelings until now.  Now that danger in their world is at an all time high.  The concept of this world was so cool!  It wasn’t so much sci fi and more dystopian in a way.  The Land’s End Highway has many areas along the way.  The only ones usually traveling the open road are military and more recently rebels.  And the rebels have become a huge factor that Loyal (our hero’s name, love it!) has to take care of.  I loved Verity and Loyal, they were perfect together.  She was smart and kick ass at the same time as she was innocent in the ways of the world and the flesh.  I would love to read more about either them or this world.  It was perfection!  Please Ms. Dane give us more of Land’s End!

I’ve read Megan Hart’s sci fi stories before and this is probably one of my favorite stories in that genre for her.  However, I didn’t like certain concepts.  This is the story of a woman who has a job as a Lighthouse keeper, she also uses the lighthouse as a place for war veterans to recover their memories and their health after battle.  One of her newest patients is her husband.  He left to fulfill his duty and has come back, after being taken by the enemy, with no recollection of who he is.  He is immediately drawn to her, even when he knows she’s a married woman and would probably most likely be cheating on her husband with him.  But that doesn’t stop him or her.  It took me a while to warm up to the characters and the premise but after a little over half way into the story I enjoyed it.  I think though, after reading this story, I’m not sure there’s more room for more stories in this world.

I don’t think I’ve read either author, but I do love Sci-Fi so I might give them a try with this duology. Thanks for sharing!

I love Lauren Dane so I’ll have to get this book. Thanks Francesca.

Thanks for the review Francesca.

I’m glad you mentioned they were standalone novellas. I am trying to finish up and catch up on some of the series I’ve been reading and was not ready to start a new one yet.

I agree amy…I’ve actually been looking for standalones

I like that there are only 2 stories here….also I’ve been getting in to sci fi ….thanks francesca