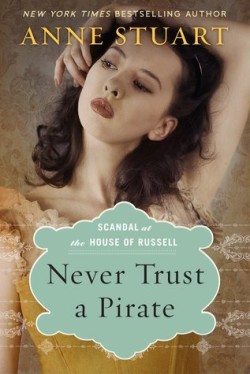 …the characters are well drawn but nothing new, and the romance is predictable~ Under the Covers

The middle daughter of a disgraced and deceased shipping magnate Madeline Russell is resolved on proving that her father is innocent and was in fact murdered. Her elder sister Bryony has married and therefore cleared one of the suspects and Madeline is intergrating herself in to the house of another. Thomas Morgan, former pirate and her father’s favourite captain, until he unexpectedly dismissed him suspecting him of theft and Maddy is determined to discover if her father was correct. However, the one thing that head strong and beautiful Maddy never expected was the instant attraction and pull she feels toward her suspect.

I admit to being a little bit disappointed with this series, although I have liked both this book and the first one Never Kiss a Rake, they are both very ordinary. There is nothing that stands out and really grabs your attention as I have found with previous books by Anne Stuart, the characters are well drawn but nothing new, and the romance is predictable. For some reason this series seems to lack the edge of her other books, although Luca (aka Captain Morgan) is a bit of a bad boy, I think the razor sharpness and wicked decadence of the Rohan men leave him in the dust. And Maddy came across as spoiled and stupidly headstrong rather than brave and defiant.

What I did like about this book though was the sexual tension between Maddy and Luca, from their first meeting sparks fly and this continues all the way through the book as they play an intriguing game of cat and mouse. What is also good about this series and will prompt me to continue the series is the mystery regarding and who killed the Russell girls’ father and why, I almost like this part of the story more than the romance.

This may not have been the most original historical romance I have read but I still enjoyed reading it and I will read the next book. However, I hope that Anne Stuart shakes her formula up a little bit, this book was eerily similar to the first one.

Thanks for the honest review suzanne