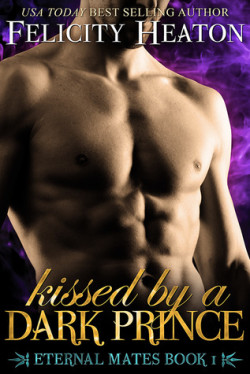 Kissed by a Dark Prince
by Felicity Heaton

“If you know Ms. Heaton, you know that she writes pretty mind-blowing steamy scenes.” ~ Under the Covers.

Olivia is a scientist who works for Archangel Labs studying paranormal beings. And the next being on her table is one she is not familiar with. She knows he is different and even more unique is the connection she feels towards him. Prince Loren definitely feels the same way and strengthens a mating bond after biting Olivia for her blood. Deciding the bond was a terrible idea, they will have to work together to find a way to break it.

If you know Ms. Heaton, you know that she writes pretty mind-blowing steamy scenes. She never fails to deliver love scenes that will leave you wishing you were the heroine of the book. Liam is sexy as hell, and despite the lack of practice (he’s been celibate from some time), he sure knows what he’s doing. The attraction and “love” was a bit fast, but it didn’t really feel like an “insta-love” type of romance. It works because the story line included “fated mate” and blood bonding making their “connection” believable. I think that’s why I love the PNR genre. Love has no bounds.

I wasn’t surprised that the world building was intricate and well thought out. Ms. Heaton explained the world well. It was complete with history and drama between the Human, Demon and Elven realms. The history between the human worlds was quite interesting. Ms. Heaton brings a whole new take on Demons, Fae and where Vampires come from. In this world, the vampires are treated like abominations (at least in Loren’s POV). This is where I get confused because Eternal Mates and VET are supposed to be in the same world. If you read Ms. Heaton’s VET series, the vampires are far from being abominations. The idea sort of conflicts. Especially if the worlds are suppose to be connected and have some type of crossover. I’ve heard that characters from VET will make an appearance in the next book or two.  My man, Snow is suppose to have big cameo.  I know that there was already a cameo in this novel though not very prominent. With that said, I want to know what she has up her sleeve.

Secondary Characters were weaved into the story well , and they were heart-droppingly sexy! Ms. Heaton, as always, did a great job with the buildup of their characters. Vail, Blue and Thorne will have their own book with Thorne being the next in the series. The set up for Thorne’s book is obvious. He has the hots for Sable , and it showed all over the place. From the scenes they had together, you can see that they have something intense going on.

I am most curious about Blue. Something about him screams…“Bad boy but waiting to be tamed by the right female”. I’m bummed his book is not next , and I’m afraid Ms. Heaton will make me wait a long time before we can have his story. That is exactly what she made me do with Snow from VET series. But I’m sure it will be worth the wait.

* ARC provided by the author

I haven’t read any book from Felicity Heaton,but this books sounds like a good one 🙂

Thank you for the wonderful review Angela 🙂

I have to read the theater….I’ve heard so many good things about it…this sounds good too…thanks angela

ARC Review: Tempted by a Rogue Prince by Felicity Heaton | Under the Covers Book Blog