Join our newsletter to be the first to hear our latest news! Learn More
Home / Reviews / ARC Review: If Wishes Were Earls by Elizabeth Boyle 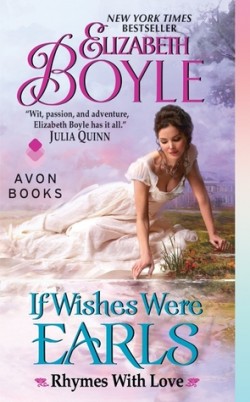 If Wishes Were Earls

It isn’t very often that it is the hero of the tale that puts me off a book, but in this case that is exactly what happened ~ Under the Covers

Harriet Hathaway has been in love with the Earl of Roxley since she can remember and after a scandalous night with him, she fully expected him to ask for her hand. Instead when she sees him again he is almost engaged to another woman. But Harriet can sense all isn’t what it seems; the man she loves wouldn’t callously discard her in that way and there is something not quite right about his supposed intended. Roxley is in trouble and fully intends to help him put things right again.

It isn’t very often that it is the hero of the tale that puts me off a book, but in this case that is exactly what happened, it wasn’t that Roxley was cruel or stupid he was just rather tepid. It isn’t that I expect a big bad alpha hero in every book I read but I do like a hero to have some backbone, but Roxley seemed perfectly content to allow himself to be blackmailed and forced into a marriage he didn’t want, that is until Harriet came along and decided to stir things up.

Harriet I liked, she was feisty and intelligent and never gave up on the man she loved, she saved me from giving up on this book entirely. Romantically, they did have some chemistry together, there had shared history, but for me it all just fell a bit flat as I never really warmed up to Roxley.

Unfortunately I just didn’t enjoy this book as much as I would have liked to and definitely not as much as other books I have read by Elizabeth Boyle, perhaps I will like the next book in the series more.

Elizabeth Boyle was an antipiracy paralegal for Microsoft before settling down to write full-time. Her first novel, Brazen Angel, which won Dell's Diamond Debut Award in 1996, also won the Romance Writers of America's RITA Award for Best First Book, and was a finalist for Best Long Historical Romance. She lives with her husband in Seattle, Washington. She is also the author of Brazen Heiress.

I was loving Elizabeth Boyle until I read memoirs of a scandalous red dress…I haven’t picked up anything by her since :/ thanks Suzanne