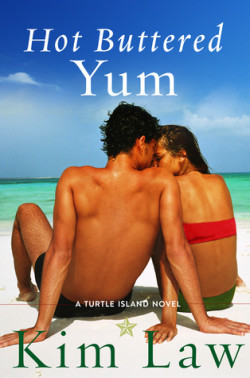 “Kim Law’s heroes from her Turtle Island series have the knack for riling up my emotions.” ~ Under the Covers

Kim Law’s heroes from her Turtle Island series have the knack for riling up my emotions. Mark from Ex on the Beach did it and now, Lucas in Hot Buttered. Luckily, Ms. Law knows how to reel me right in making me fall deeper in love with her hero.

Lucas is a single parent working full time who is on Turtle lsland to compete for the Yummy Santa contest. Roni and the rest of her friends are hosting this competition and well, this can dampen on the undeniable attraction she and Lucas have for each other. Will they let this stop them from having an affair? Nah, their attraction is strong , and not even their author could’ve stopped them if she wanted to. =)

I actually liked Lucas from the start. I thought he was a stand up guy, very sweet and most definitely sexy.  I love that he  pursued her even when she  tried to stay away from him.  He knew how she felt and he didn’t want to let her go.  My only problem with him was that there was a time when he demanded a bit too much from Roni a bit too soon. Knowing that he came with an instant family and Roni a jaded single gal; he should understand her fears and maybe give her some slack. Lucas does make it up in the end. He won my heart back leaving me with a happy tear or two.

I didn’t expect Roni to end up with Lucas. From the last novel, I thought she would end up with Mark’s friend. It worked out well because Roni truly needed a man like Lucas. She’s been alone for quite some time , and it’s time she falls for someone who is stable and ready for a long term commitment. I’m glad she finally got her happy-ever-after.

Next up is a novella called Two Turtle Island Doves. I will be about Kelly, Lucas’ friend who is also a contestant for the Yummy Santa Contest. There was a clear introduction of him in this book and from what I gather; he and his wife were in the middle of a divorce. Looks like his story will be about second chances and Christmas themed. I’m excited to get to it! I love second chances.

This sounds cute and I like the title…..thanks angela