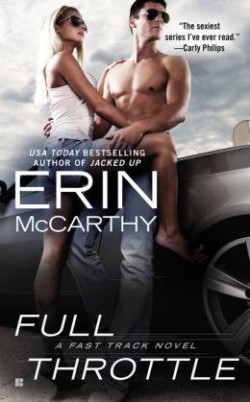 “The constant push and pull in their relationship, along with the sparks these two created, kept this book going strong and I didn’t want to stop until I got to the words “THE END.”” ~Under the Covers

I’ve always been a big fan of the series and one of the reasons is the feeling of “family” that this group of characters has.  And usually, I also enjoy the little bit of sports that actually goes into the stories.  They are sweet and just enough sexy and all around feel-good reads.

Shawn is in a bit of a bind when her grandfather passed and left her the race track as her inheritance.  But in order for her to inherit it, she must be married for at least one year.  Shawn is not the marrying kind.  She’s in her 30s and not looking to settle down with anyone right now.  So it makes perfect sense to offer hunky Rhett a deal and propose to him.

I have to admit, sometimes these storylines can be a bit cheesy or feel too easy to make them work as a couple.  But Ms. Carthy did a wonderful job with this story.  There were so many conflicts they had to overcome, even after getting married.  There’s the age thing (yes, she’s a cougar) and there’s the D/s thing (she’s didn’t think she wanted it, he wouldn’t take any thing less).

I think it’s safe to say Rhett is pretty irresistible, and he doesn’t focus on a woman easily.  When he sets his sights on you, he goes full force and intense.  And let me tell you the puddle of goo you will turn into for this guy.  Not only is he a bit dark and dominant but he has such a sweet and loving side.  And deep down he has a sense of humor too.  Those might be my favorite parts, seeing him open up to Shawn in ways that he may have not opened up to anyone before.  Letting the walls down just enough that she could slip in and see both sides of the real him.

Shawn is also my type of chick.  Most of the women in this series are.  They are independent, a bit kick ass, not scared to tell their man the way it is.  She’s determined to do what needs to be done for her to get ahead and succeed.  And she’s woman enough to grovel when she’s made the wrong decision.

The constant push and pull in their relationship, along with the sparks these two created, kept this book going strong and I didn’t want to stop until I got to the words “THE END.”

USA Today and New York Times Bestselling author Erin McCarthy sold her first book in 2002 and has since written almost fifty novels and novellas in teen fiction, new adult, and adult romance. Erin has a special weakness for New Orleans, tattoos, high-heeled boots, beaches and martinis. She lives in Ohio with her family, two grumpy cats and a socially awkward dog.

I love this series and I can’t wait to read this one.

Hope you are able to read it soon Lori 🙂

I just read this one and it was my intro to Erin McCarthy. Loved it. Rhett is to die for.

Great to hear Sophia, hope you give the rest of the books in this series a try as well! Yes, Rhett was delicious!