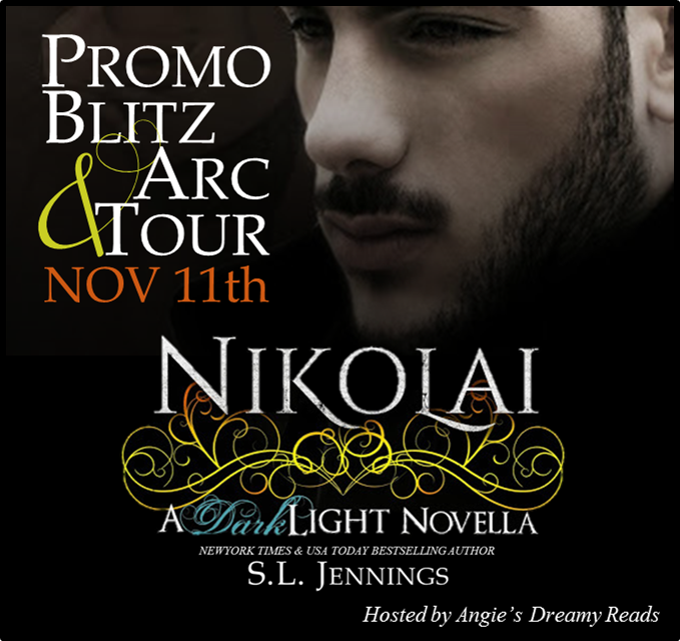 I stand at the foot of the bed, gazing down at the naked bodies twisted in rumpled satin sheets. Pale moonlight kisses their skin, making them appear ethereal, ghostlike even.

So beautiful. So soft. So weak.

I lean forward, propping a knee onto the mattress, and position myself between their sleeping forms. My fingers graze their soft skin, leaving a trail of goose bumps in their wake. I inhale their combined scents, picking up traces of alcohol, sweat and sex. And something else. Something more. It invades my lungs and bursts in my chest, sprouting tingling warmth in my extremities.

Just a drop between the two, but it will do. These days, it’s harder and harder to find more than that. In a willing donor, that is.

I lay down facing the brunette, my hands exploring the soft contours of her body. I brush her cheek with the back of my hand. She was stunning once- I can tell. But her indulgences have aged her. Her vices, her weaknesses, have not been kind to her. She’ll die before her time, I’m certain of it.

“Wake,” I whisper. Instantly, her eyes open, and once her pupils adjust to the dark, she smiles.

I give her a slight smile and cup her face between my hands. “Look at me.”

She complies instantly, looking back at me with trusting, brown eyes. Eyes that will forget that they ever saw my face. They dilate within seconds and her body relaxes against mine. She’s completely open to me- her thoughts, her actions…all mine. But most of all, her magic. The tiny trace concealed in her bloodline flows freely into my body as I inhale the base of her neck. I moan and let my teeth graze her throat.

Fuck, it feels good. It always does, transcending any measure of human pleasure. Breathing is beyond feeling. Beyond physical sensation. It’s complete and utter euphoria, exploding in every synapse. It’s feeding your soul and making love to your spirit. It’s life itself.

My dick twitches to life, and soon I am hot and hard against her thigh. “Touch me,” I mutter, my mouth moving down her chest. She unleashes me and begins to stroke, only heightening the sheer bliss pumping through my veins. I squeeze my eyes tight and imagine it’s someone else caressing me. Someone else kissing the side of my face as I lick a trail from her collarbone to her hardened nipple.

Amelie. It’s as if the name is carried by a wisp of wildflower-scented air.

I bury my face deeper into her skin, trying to lose myself…in myself. My desires, my secrets, my fears. They’re all magnified times ten, drowning me in the once perfectly contained emotions that seep from the cracks of my broken soul.

I can feel the pull…the pull towards her. Beckoning me to relent and stop the charade. My whole fucking life is a charade, and I’m nothing but a puppet, dancing around like a fucking fool in hopes of some type of acceptance. Some sign that I’m more than a philandering piece of shit. More than a cold, ruthless killer.

More than my father.

“Wake,” I growl, against humid skin. Within seconds, another set of hands joins us, kneading my shoulders and back. The blonde kisses my neck as she moves her body into my line of vision, offering it to me. Roughly, I grab her waist and pull her to me, burying my face in her neck and chest. Her scent, her flavor, is subtly sweet, warm, but not warm enough. Not sweet enough. Not like her. Not like…

This time I pause, but only long enough to part her legs and sink into her without warning. She cries out from shock, pleasure, and even a bit of pain. I don’t care. I don’t give a fuck about anything right now. The brunette positions herself over the blonde’s mouth, sating her own fiery need. She offers herself to me, and again, I take her. But her magic is waning. She’s weak. And while her body seeks pleasure, her soul is slowly dying. She sags against me, trembling with the aftershocks of orgasm and fatigue. I push her aside, digging into the blonde’s wet core with unrelenting strokes.

I fuck her until she can’t take anymore, breathing nearly every drop of life from her limp body. When I finally stop, I realize she’s unconscious and eerily pale. Doesn’t matter. I climb out of her and sit on the edge of the bed, pulling at my hair, wishing like hell it would help me forget. That it would take away that urge to go to her. I don’t understand it- shit, I’ve never felt it before- but it’s there. And, shit, it’s stronger than anything I have ever felt. Maybe even stronger than me. 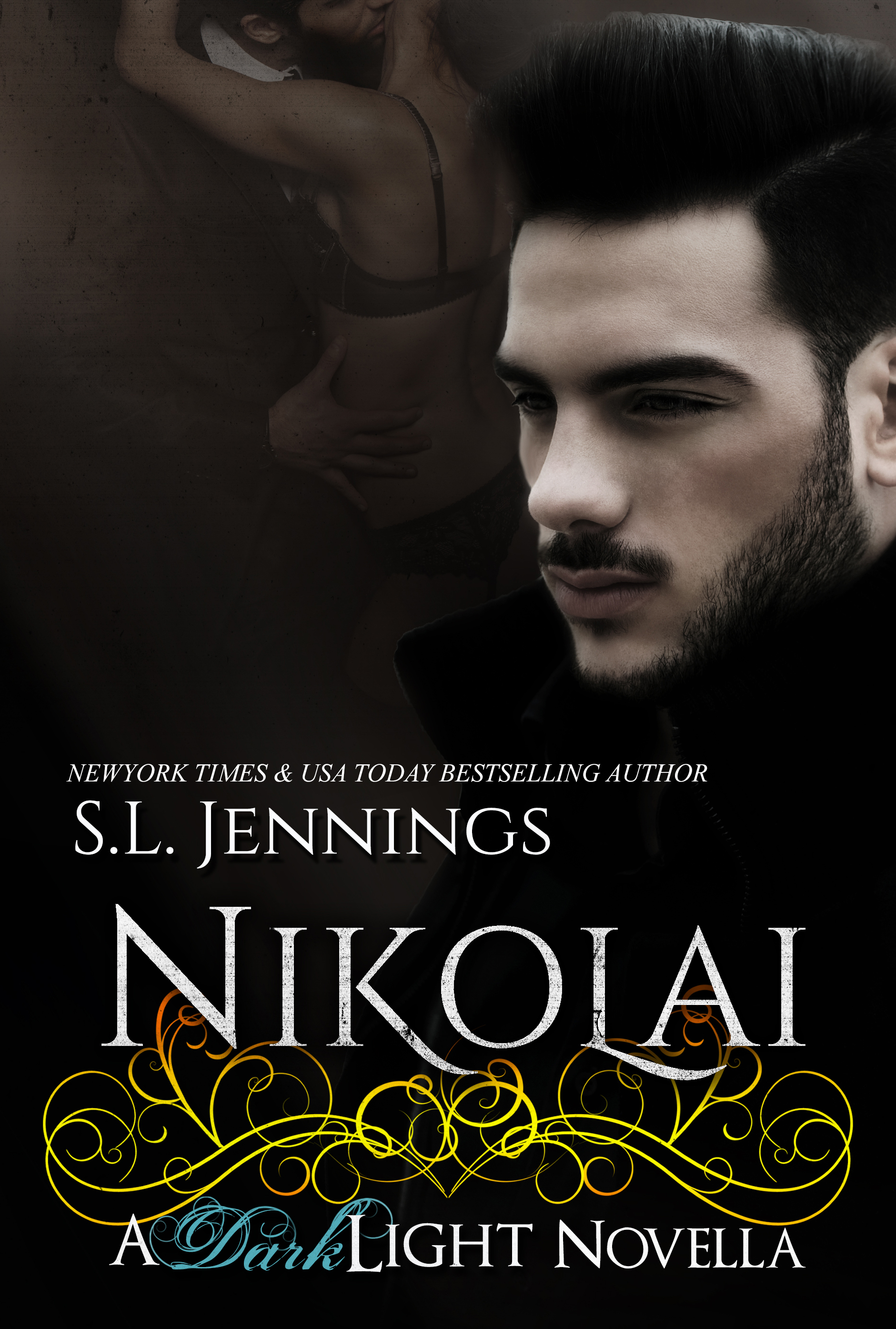 Two centuries ago, I clawed my way into a world of immorality, filth and destruction. A world seething with secrets and lies, both mortal and immortal.

I know we’re supposed to be inherently evil, but something inside me refuses to fully believe our legends. Something that calls out for more…calls out for her.

But there are rules. Rules that control the balance of nature. And if broken, it could destroy everything I’ve ever known. It could destroyme.

I am Nikolai Skotos, son of Stavros and Delia, and brother of Dorian, the heir of the Dark throne. I am one of the most powerful Dark forces to have ever walked this earth.

And I once was lost.
Now, I’m about to give it all up for the girl that found me.

*This is a PREQUEL NOVELLA for the Dark Light Series, NOT Book 3, to be read AFTER reading Dark Light & The Dark Prince*

Most known for her starring role in a popular sitcom as a child, S.L. Jennings went on to earn her law degree from Harvard at the young age of 16. While studying for the bar exam and recording her debut hit album, she also won the Nobel Prize for her groundbreaking invention of calorie-free wine. When she isn’t conquering the seas in her yacht or flying her Gulfstream, she likes to spin elaborate webs of lies and has even documented a few of these said falsehoods.

During this blitz you can win a $100 Amazon gift card as well as 10 digital copies of Nikolai!

Ooooh I love the sound of the excerpt and the blurb is even better! Thank you for spotlighting it

I know….I find so many new authors here!

Oh wow great excerpt , thanks so much for sharing-I’ve got another book to add to my wishlist 🙂

The excerpt was intriguing, after checking Amazon it appears I have book 1 so I added the others to my wishlist.

I have to say that the blurb has me intrigued. I love finding a new series that sweeps me away. I’ll have to check it out, maybe–never read this author. Maybe I’ll see what other reviews are saying.