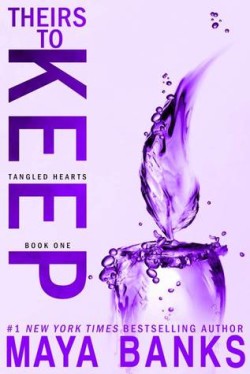 Theirs to Keep
by Maya Banks

“Though Thiers to Keep had its weaknesses, there were strengths that made the book an enjoyable read.” ~Under the Covers

Cade and Merrick are best friends and business owners of a Security company. One night during investigating a tripped alarm, they found a woman with amnesia in desperate need of help. Of course, their ‘alpha male” nature had taken over and saving Elle is the most logical move for them. Unfortunately, Cade and Merrick both fall for Elle and decide they will not lose their friendship over the woman they love, pushing them into a unconventional relationship. Complicated as it is, the romance pretty much starts from there on.

I have to say that threesomes are not my typical reads though I do enjoy them now and again. I think Thiers to Keep’s strengths are in the mystery of who Elle really is and the hopes of her getting her memory back. It was also the mystery of how they will get together as a “three” unit when none of them had lived this lifestyle before. I have to mention that, Ms. Banks never fails to provide just the right amount of steam in her novels, and this book is no exception. However, there were things that held me back from fully enjoying this book. I won’t go into details because there’s just no way I can mention them without giving any spoilers. There were some things in the book that were predictable and almost made me lose interest. There were also some scenes that seem unrealistic to me. I know this book is of fiction , but it is of a contemporary genre which I expect to be realistic as much as possible in comparison to PNR or Fantasy where realism is pretty much tossed aside. And last, though I love the attention that Cade and Merrick gave Elle, there were a couple of scenes that made me roll my eyes and thought…”really?”

Though Thiers to Keep had its weaknesses, there were strengths that made the book an enjoyable read.  And though I’m not sure if I will continue with this series, I can’t help but be curious of what will happen to Elle. Amnesia is not something you come by every day, so how Ms. Banks will play their story intrigues me.

This book looks great I have it on my wishlist.

Under the Covers Book Blog
Admin
Reply to  Leanna h

Thanks for passing by Leanna. ~Angela

Thanks for passing by Elizabeth. ~Angela

Thanks for the honest review Angela 🙂

I love Maya’s books but if this is a cliffhanger I am going to wait for the others to be published before reading. I hate cliffhangers.

Wonderful review. You pinpointed a lot of things that bug me about Maya Banks books. I feel like if you read one of them, you’ve basically read all. I think I’m gonna avoid this one. Thanks for the fyi 🙂

Thanks Komall, Much appreciated. ~Angela

Hmmmm I’ve only read two of hers but they were separated by a bit of time but that gives me something to think about ….thanks komal

MFM are fun reads Aly. This one is more love triangle. but ….maybe the next book =). ~Angela