Welcomed back to UTC, it’s always a pleasure to have you here.  For those who do not know you, Please tell us about yourself.

Thanks for having me here! I currently write two different paranormal series: the Iron Portal series (warriors with special abilities) and the Sweetblood series (vampires).

Thank you!!! I’m still pinching myself that it’s been so popular with readers. It’s been a dream come true, that’s for sure. And it’s been so fun working with those talented ladies.

Tell us a little about ROGUE’S PASSION and what can readers expect from this series.

In the Iron Portal series, secret portals divide the modern and ancient worlds. Only a chosen few, Warriors of the Iron Guild, know their locations. Rogue’s Passion is Asher and Olivia’s story, and it’s set primarily in New Seattle, although they do cross the portal a few times and visit Cascadia. When Asher is on this side of the portal, he rides a motorcycle and hangs out at Reckless Motor Sports with a ragtag group of men. The story starts with a bang—literally—that throws Asher and Olivia together.  He convinces her to stay with him for the week and become his sex slave. And wouldn’t you know it, she agrees. Although they don’t know it at first, they have mutual enemies, so things heat up both inside and outside the bedroom. The next book is about Olivia’s brother Vince, which will be out next year.

Can you tell us what’s to come from Sweet Blood series?

I’m working on a novella that will be out early next year. I can’t tell you whose book it is yet until it’s done, but I should have news by December. And next year, I hope to have lots of Sweetblood news. 🙂

Any possibilities of Sweet Blood and Iron Portal Crossing paths with each other?

Ooh, now that would be fun, wouldn’t it? They are both set in the Seattle area…

I get up around 6:15-6:30 every morning, even on the weekends, without an alarm clock. After my daughter leaves for school, I make myself a latte and check email. Then I go down and feed the horses, come back up to the house and start writing.

Thanksgiving is coming up, tell us a few of your family traditions.

Ever since my grandmother passed away, I’ve been making her Eggnog Pie for Thanksgiving. My grandfather looked forward to it every year, saying it reminded him of her. When he passed away a few years ago, I wasn’t sure everyone wanted me to keep making it, but my family nearly mutinied. So that’s what I do every Wednesday before Thanksgiving. Make Eggnog Pies. Wanna come help? 😉

Are you a Black Friday Shopper or a Cyber Monday shopper?

I don’t do Black Friday because I hate the crowds, but I do try to participate in Small Business Saturday (there are a lot of fun events planned at local indie bookstores this year) and I have been known to shop the Cyber Monday sales online. I’m an Amazon Prime member, too, so I watch those Gold Box deals.

What would be the weirdest thing we would find if we looked at your Google search history at the moment?

Let me go check. Hold on. Okay, here’s one. I needed to know what $500 of weed looked like. Even though it’s legal in the State of Washington now (it’s weird walking around downtown Seattle and smelling it), I needed to know for book research. LOL Which reminds me. I still need to correct the details in that manuscript. 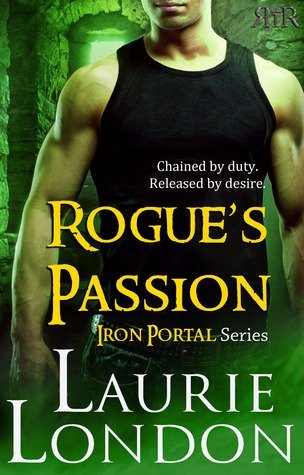 Hidden within the rugged mountains of the Pacific Northwest, Iron Portals separate the modern and ancient worlds. Only a chosen few, Warriors of the Iron Guild, know their locations.

For years, Olivia Crawford has kept a low profile in order to keep her para-ability secret. If the army finds out she’s a Healer-Talent, they’ll force her to work for them—just like her brother who was taken as a boy and never seen again. But when a terrible explosion rocks New Seattle, she risks everything to save the injured, including a handsome stranger with secrets of his own.

Blaming himself for the death of a friend, Iron Guild warrior Asher Kane vows to bring those responsible to justice. After he’s hurt on a mission and nursed back to health by a beautiful yet mysterious woman, this dangerously sexy bad-boy finds himself falling for her…even as he struggles to stay away.

“I’ve decided on your punishment, Olivia.” He’d gone all formal on her again.

He brushed a thumb over her lower lip, leaving a trail of sparks. “For the next week, you’re going to be staying here with me.”

Her gaze snapped up to his. “What? Here? With you?” He stared at her with that ruggedly handsome face, gauging her reaction. She had heard him correctly. “I can’t stay for that long.”

“I don’t see why not,” he said matter-of-factly. “The HOT isn’t expected to reopen for days, your car is still trapped in the garage, and you don’t have a job anymore.”

Yes, all that was true. But still. She’d just met him. He couldn’t really be serious about her staying the week with him, could he? She needed to hide out for a while, wait until things calmed down…but with him? “What if I have other plans?”

His arrogance should’ve pissed her off. Instead, she was secretly thrilled. “Why would I want to do that?” she asked, feigning indifference.

“Because I’d like to spend the next few days fucking you, Olivia, and I want you all to myself.”

Her mouth dropped open. She was pretty sure she would’ve staggered backward if he hadn’t been holding onto her. She was both shocked and turned on by his brazen vulgarity. Molten heat burned between her legs and her inner muscles tightened in response. “And that’s my punishment?”

Without asking permission, he pulled down her towel and lazily circled her areola with a long finger, causing her nipples to peak even further. “No, because I’ll make sure you enjoy it as much as I will.”

She had no doubt he would, because she was on the verge of coming and he hadn’t even slipped a finger inside her yet.

“So if that’s not my punishment, what is?” she asked, huskily.

He pursed his lips and frowned as if he were thinking, all the while teasing her breasts. She knew damn well that he already knew the answer. “During your time with me, you must submit to everything I ask of you.”

She swallowed nervously and thrills of pleasure ran down her spine. “You mean like…be your slave?”

“That’s exactly what I’m saying, Liv. You will be my slave for the week.”

She’d always been completely in control of her own life, moving around, never letting anyone in too close. But Asher knew her secret and he’d proved he could keep it. It might be interesting—and fun—to relinquish control just this once.

“Will there be any limits?” she asked. “Because I’m not doing anything illegal or disgusting.”

“Nothing like that. I promise.” His eyes twinkled with mischief.

She considered her options and decided that waiting until next week to look for another job wouldn’t be a big deal. “And at the end of seven days?”

“We go our separate ways. I’m not looking for a courtship, Olivia. This is just for fun.”

After her last relationship fiasco, she wasn’t interested in anything long-term, either. She was just looking for a good time with no strings attached. Glancing at his motorcycle boots thrown carelessly on the tile floor, she remembered her vow to stay away from the bad boys.

That could start next week, too.

Okay, a little about me. I'm a USA Today bestselling author of paranormal romance: the Sweetblood series (vampires) and the Iron Portal series (portals + people with special abilities). I live in the Seattle area with my family and a bunch of animals (which are interchangeable sometimes), including my horse.

I’ll away a digital copy of ROGUE’S PASSION, gifted from Amazon or BN,
to a random commenter. So tell me: Boxers, briefs or nothing?

I hate underwear!! As soon as I’m at home I remove my boxers!! XD I would prefer to get those removed, but I have a lack of candidates lately XD

Under the Covers Book Blog
Author
Reply to  Marka

Boxer briefs are what I get my DH.

I like the variety in shape shifters. There are so many different types and different myths.

Boxer briefs, they look more adult than briefs and the knit cling is better than regular boxers.

Also I love that shape shifters have this almost animalistic primal thing about them. So sexy.

I love the shifters. I love your books. The vampires in your books are also sexy.

So glad you enjoy the books, Misty!

I like bear shape shifters. I prefer briefs or nothing 🙂

I wasn’t until I read the dark hunters series by sherrilyn kenyon….yum!!

I like all kinds of shifters, my fave is definitely the bear but If I had to become one then I would be a cat, any kind. And the answer to the question, definitely boxers 🙂

Boxer Briefs would is my pick! The briefs just remind me of a speedo…GAG

lol… for me briefs… but for guys… boxers 🙂 The naked… not so much… remember that sex and the city ep where Charlotte’s hubby went and sat on her white furniture naked and she was appalled? That’s me 🙂 Congrats to Laurie on the new release and thanks for sharing!

I love that shifters are all very sexy and very masculine predators.

So manly, so protective, so yummy!

I would love to be a panther!

Hmmmm a wolf or big cat

Oh and either briefs or nothing

I’d want to be an Owl because they are beautiful, they can fly and are nocturnal!
Thanks for the giveaway!

I like those nicely fitted boxer briefs. They show off those manly assets so very nicely. Boxers are sexy, too, but just not as sexily revealing.

Boxer briefs.
The blurb sounds very good,I would love to read this book,it’s go on my TBR 🙂

Thanks for the interview! 🙂

What kind of shifter would I be? First choice, dragon, second choice, wolf. Best of all, a shifter who could be three forms…dragon, wolf, human. As to “under” the clothes, nothing, or boxer-briefs, preferably nothing!

I reason I like Shifter’s is they are so Alpha and caring. Would love to be able to change in to a Wolf

For me briefs for men boxers, although nothing can be fun to. Can’t stand the tighty whities, lol. Love the series and can’t wait to read this one

[…] Interview and Giveaway with Laurie London […]