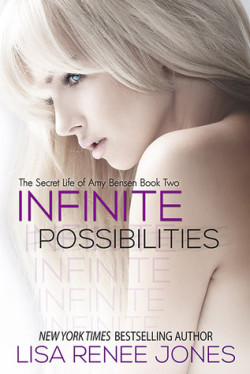 “The plot definitely thickens in this second installment of The Secret Life of Amy Bensen. Ms. Jones delivered several twists and turns to the story making the mystery of Amy’s past even more intriguing.” ~ Under the Covers

The plot definitely thickens in this second installment of The Secret Life of Amy Bensen. Ms. Jones delivered several twists and turns to the story making the mystery of Amy’s past even more intriguing. Amy now is not running from her past but running towards it. She is sick of her lonely life and she wants to find out the why’s of it all. Ms. Jones does not hold back. She gives Amy everything she wants to know no holds bar.

Liam and Amy play more of a couple from a New Adult genre in this installment. There was a bit more angst compared to the last book. I thought the romance was not that strong in this book. It could be because I was just too focused on the twists of the story that I didn’t pay attention. But overall, Liam and Amy are hot together. Liam being super sweet and always strives to keep her safe. He really just wants to take care of her. Of course, everything he does is done in his own controlling way and Amy didn’t always agree with his tactics. But then, I didn’t always agree with Amy in her thoughts and decisions in this book either. She has a hard time trusting Liam but clearly too blind to see what is I front of her. *sigh* I guess all her doubts and “paranoia” are understandable given her past. Don’t get me wrong she wasn’t a “TSTL” kind of heroine. The things she did of course played right along with the plot of the story and it worked well in the story line.

This book does answer some but not all of the readers’ questions from book one. New ones arise and will make you want the next installment ASAP. Of course, coming in to this series and knowing Ms. Jones, I’ve come to expect it. Though this series is not as good as her Inside Out series it still is a very good read.

One winner will be selected to win a red INSIDE OUT series bag
and a SIGNED paperback of ESCAPING REALITY.

His touch spirals through me, warm and sweet, wicked and hot. I shouldn’t trust him. I shouldn’t tell him my secrets. But how do I not when he is the reason I breathe? He is what I need.

At the young age of eighteen, tragedy and a dark secret force Lara to flee all she has known and loves to start a new life. Now years later, with a new identity as Amy, she’s finally dared to believe she is forgotten–even if she cannot forget. But just when she lets down her guard, the ghosts of her past are quick to punish her, forcing her back on the run.

On a plane, struggling to face the devastation of losing everything again and starting over, Amy meets Liam Stone, a darkly entrancing recluse billionaire, who is also a brilliant, and famous, prodigy architect. A man who knows what he wants and goes after it. And what he wants is Amy. Refusing to take “no” as an answer, he sweeps her into a passionate affair, pushing her to her erotic limits. He wants to possess her. He makes her want to be possessed. Liam demands everything from her, accepting nothing less. But what if she is too devastated by tragedy to know when he wants more than she should give? And what if there is more to Liam than meets the eyes?

It’s intriguing… I really want to try it 🙂

Give a chance on this series Aly,you won’t be disappointed 🙂
Lisa Renee Jones write amazing! 🙂

Thanks for the review Angela I’ve got book one on my tbr pile, I need to get this one.

As always, you have a great review.
I am looking forward to reading this very soon. Its on my kindle, just have to find the time to get to it myself

I read both books,totally agree with your opinion Angela 🙂
Wonderful review 🙂

Thank you for this awesome giveaway! can’t wait to read it sounds good 🙂

sounds great thanks for the giveaway

Nice review. I really enjoyed this installment in the series and I can’t wait to read the rest!

this sounds a bit like on dublin street which i really enjoyed so i may try this….thanks for the review angela and the giveaway

cant wait to read this book

Good review! I’m looking forward to reading about what happens in the next installment.

I love a good mystery so mix it up with romance and you have hooked me.

Me too!!…I love the mystery + romance mix…over the last few months that seems to be what I’ve buying 🙂

Thanks for review. I really curious with this books, so i add on my wish list 🙂

A very helpful review thank you.