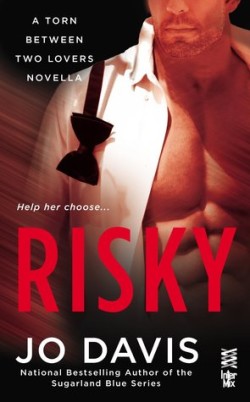 “…Ms. Davis delivered her story well and I enjoyed every bit of it. ” ~Under the Covers

In this second installment of Torn Between Two Lovers, Ms. Davis delivered the full story of the love triangle. Where Raw focuses solely on Anna Claire’s Relationship with Grayson James, Risky focuses on Anna’s relationship with Joaquin. And personally, I enjoyed this novel much better than the first and totally loving Joaquin more than Gray. Yes, I admit, I AM MOST DEFINITELY TEAM JOAQUIN.

Risky takes off right where Raw had ended. Anna now is taking her vacation away from Gray and meeting the third members of this love triangle. I actually enjoyed Anna and Joaquin’s story. Their coming together is raw and honest. I thought their attraction was off the charts from the get go and Joaquin coming clean with his intentions was unexpected. I actually thought he would lie through his teeth to get Anna into his bed and later fall for her like Gray did. But he did it; he managed to get my attention as well as Anna’s. Not only he swept her off her feet, he took the time to get to know her and to let her get to know him. That kind of beginning just takes away that insta-love type of relationship as what Anna had with Gray. And if she was smart she would do well to choose the honest man versus the one that lied from the beginning. Joaquin is dangerous, with a not so innocent past (but straightening out his present), rich, and hot as hell. There’s just no better choice.

Ms. Davis also added a bit of action and more suspense in this installment which I enjoyed more than the first book. The steam factor was hotter and I find I find it more sensual. Like I said, Ms. Davis delivered her story well and I enjoyed every bit of it. The next series will be the decision of who Anna will end up with. If you didn’t already know, Ms. Davis has not decided on whom Anna will choose. This will be up to the readers who will vote for the man they want Anna with. If you couldn’t tell already by my review, I am totally for Team Joaquin.

Did you like this review? If so, Please tell us you thoughts in the comments below!

Never heard of this series but I love the cover! It sounds interesting though. Adding to the TBR. Thanks!

Thanks for passing by Komal. ~Angela

How could you choose?

It’s usually hard to chose. But it wasn’t hard with this series. I just hope Joaquin wins. ~Ang

Good point….why choose if you don’t have 😉

The series sounds good but I would have to wait for the last books release before I read since I hate cliffhanger types of books. I need answers or it drives me nuts.

Hi Amy, I agree with you on the wait. =D ~Angela

I’m not big fan of love triangle 😀
But if the author managed to write story who captured my attention,that I don’t mind,there are exceptions 😀
The cover is cool,maybe in near future I will read these books 🙂

Thanks Bube, I really liked this installment. Thanks for passing by. ~Ang

I don’t usually care for love triangles but this one has me intrigued…thanks for the review Angela.

hey Timitra, I don’t usually like them either. So far the angst here is not to bad. and what I like about this is that it’s an adult novel vs. NA love triangle.
If that makes sense. ~Angela

Hmmmm not too fond of love triangles….so I’ll have to see on this….thank you

Thanks for passing by, Elizabeth. ~Angela