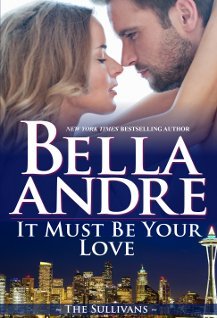 It Must Be Your Love
by Bella Andre

IT MUST BE YOUR LOVE takes a hot fling and turns it into a love story that stands against the tests of time. A definite must-read! ~ Under the Covers

If I could marry into a fictional family, it would be The Sullivans. There’s just something about this big family that makes me melt. So loving and protective, you as a reader definitely feel as if you are a part of this family as you read the books in this series. One of my good friends asked me if the series begins to wane after so many books already in the series. But I told her that I am so invested in these characters that by the end of the book I’m reading, I am pining for the next one already. Bella Andre is able to create characters that you genuinely care about, with real flaws, real conflicts and real issues. And as they find their way to love, you feel a genuine sense of passion and rightness as they each get their happily-ever-afters.

In book 11, Andre gives Mia Sullivan her happiness, but it is far from easy! Five years ago, Mia stood in a packed audience, listening to the sultry, seductive words of rockstar Ford Vincent. Even lost in a crowd, Ford’s eyes locked onto hers and since then, he is all that she has ever wanted. A week together set both aflame, but Mia soon finds out that dating a rock star isn’t possible. Women and fame will always be a part of Ford’s life, leaving no room for her.

It has been years since they went separate ways, but Ford still holds a candle to their time together. When he gets the perfect opportunity to see Mia again, Ford grabs it, not willing to lose her a second time. Though the sparks are still evident between them, they are both more mature now. Furthermore, they are two totally different people, so in order to be together, they have to relearn one another. They have to be friends.

I know what you are thinking. That’s impossible. How could anyone believe that they can go from lovers to friends even with the years between them? Bella Andre shows Mia’s toughened side. She isn’t just willing just accept Ford once again in her life. He hurt her in the past. This time, she will be stronger.

But if you know Andre’s heroes, you know that each one of them is injected in charm and determination, leaving women almost halpless in their presence. Mia holds out for awhile, but even a rock can’t keep resisting the likes of Ford Vincent.

Mia and Ford are freaking adorable! I loved how determined Ford remained through the entire book. His love for Mia shines and while he shows her with his actions and tells her with his words, you start to really believe it once Mia lets her guard down. What I love is what Andre takes her time with this one, never once rushing the progression of hearts. It’s a well-done love story that is thorough and damn sexy to boot!

Andre also nearly had me jumping in my chair with excitement because she reveals who Ian’s heroine will be in this book! Simply saying I am excited for this is a vast understatement. I am SO ready for Ian’s book. His protectiveness over his sister Mia is absolutely hilarious and I cannot wait to his more of his feathers ruffled in his own book.

IT MUST BE YOUR LOVE takes a hot fling and turns it into a love story that stands against the tests of time. A definite must-read!

“Because music can’t tell me when I’m being a self-obsessed jerk. Music can’t light up my day with nothing more than a smile. Music can’t love me back. And—” He paused to gently caress her cheek. “—music will never be you.”

Ah,beautiful quote 🙂
I love to read books with second chance romance.So far I haven’t read any book from Bella Andrea,but I heard wonderful things for this series,definitly I plan to read in near future 🙂

Thanks for the great review and recommendation Annie 🙂

I love that quote! So perfect for this story!

I hope you enjoy, Bube 🙂

I have a few of Bella Andre’s books but haven’t read any yet. I do like contemporary romance and should probably give her a try sooner than later.

Definitely try bumping this series up! I bet once you start, you may not stop 🙂

I first heard about bella andre a few weeks ago and now I see her everywhere!…and all I’ve heard has been good, especially about the sullivans …I really need to get her books…thanks

Yes! Bella Andre is one of my go-to auto-buy authors 😀

Loved this review Annie I felt your love for the characters and story.

Yay! I’m glad that came across 🙂