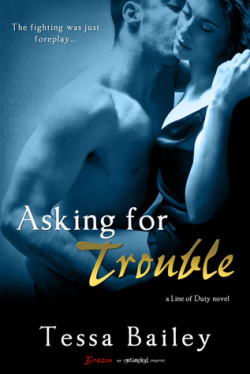 Asking for Trouble
by Tessa Bailey

The number one reason I read Tessa Bailey’s books is because she does the dirty-talking hero like no other. ~ Under the Covers

The number one reason I read Tessa Bailey’s books is because she does the dirty-talking hero like no other. With ASKING FOR TROUBLE, you have another sinfully seductive hero in Brent Mason.

Brent is an explosive expert so when he is forced to stay in the close proximity of Hayden Winstead, he knows what combustible chemistry looks like when he sees it. While the stories claims to be an enemies-to-lovers type novel, I would actually say that their fighting is more like foreplay. It’s actually never once portrayed as a deep-rooted hatred but more like flirty playfighting. To me, that’s not really enemies-to-lovers and they seem to drop into the sexual connotations and into the naughty territory very quickly for the hate to be believable.

Brent and Hayden are wonderful together. Their sex is off-the-charts hot! Bailey doesn’t not disappoint on that front. However, I am wondering if this same theme will continue in the rest of the series. Apart from the trademark dirty talk and the feisty heroines, I’m looking for something more in this series. Hayden’s situation with her family isn’t my favourite trope and that’s probably why I wasn’t heavily invested in the story. I’m hoping for something more original.

If you’re in the mood for something naughty and sexy, then Bailey is your go-to gal. Just don’t forget that I’ve claimed all the men in this series for my harem already, but I’m always willing to share 😉 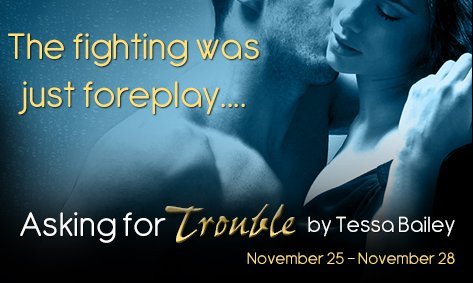 Pretending to be in love has never felt so sexy.

Brent Mason and Hayden Winstead can’t stand each other. She plans exclusive parties for her rich family’s charities. He’s a rough and tumble cop who rigs explosives for a living. Could two people be any less suited for conversation? They think not and prefer to keep it that way.

Unfortunately, their two best friends are deeply, disgustingly in love. Forced together, the mutual attraction simmering beneath the surface of Brent and Hayden’s non-relationship grows with every argument until it explodes into a scintillating night of mind-blowing sex. And it won’t be the last, as far as Brent’s concerned.

Hayden has a secret, though. Her father’s company is relying on a merger to save them from financial ruin, and only Hayden’s marriage to the CEO’s wealthy son can secure the deal. If she’s to protect her family, she’ll have to forget Brent. And he has no intention of being forgotten.

Want a chance to win an autographed copy of Tessa’s first two books Protecting What’s His & Officer Off Limits? It’s the first time they’ve ever been in print!

She’ll be giving away 3 sets. All you have to do is leave a comment below to enter.  Giveaway ends 12/1.  Limited to US residents only.

I have to agree that Tessa Bailey does do the best dirty talking hero’s. Protecting What’s His and Officer Off Limits were both great books.

Congrats to Tessa on the new release. I love dirty talking heroes, so I can’t wait to read Tessa’s books.

Thanks for the giveaway! love your books!

Oh I’d love to win a copy. I’ve got and read the ecopy of Officer Off Limits and just need Protecting What’s His! Love her books!!!

I’m reading this now <3 <3 <3 it so much! Love the banter between Hayden and Brent and also Brent's dirty talk! 😉

I can’t wait to read her books.

Thanks for the chance to win and for sharing your thoughts on the newest dirty talking hero Brent. I love me some Tessa Bailey! 🙂

I haven’t had the pleasure of reading Tessa’s books yet, but she’s definitely on my list of must trys. I have heard all great things about her books.

Me either…this is the 1st I’ve heard of herbut definitely cannot wait to read her!

I have yet to read Tessa’s book’s, but I put the Line of Duty series on my Goodreads list and on my Amazon wish list. These books sound really good.

I love books from this series!
I plan to read very soon the story of Brent and Hayden 🙂

Too bad the giveaway is US only 🙁

I’ve just got it on my kindle. I can’t wait to read it over Thanksgiving. I love all of her books.

Wow. This books sounds like it’s going to be a hot sexy read and I can’t wait.
Thank you for the giveaway chance.

Sounds like a great book; looking forward to reading it. BTW, LOVE the cover! Thank you for the chance 🙂
Email: ddoan_526 [at] yahoo [dot] com

This cover is super HOT!!

Great Review. I just got the Protecting What’s HIs.

I completely agree she does dirty talking better than anyone else. I read Officer Off Limits and loved it. She writes extremely sexy romances with incredibly sexy alpha males. I can’t wait to read the other books in the series.

Haven’t read these before

I haven’t read any of Tessa’s books yet, but they come highly recommended.

Tessa Bailey made boom in book world in 2013!Every her book is fantastic,you won’t regret it if you given a chance on this series Pam 🙂

Love this Brazen book series. I have not read any of Tessa’s books, but have read some of the others in this series. Love the covers of these books also.