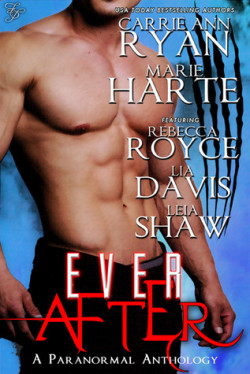 In this wonderful compilation of short stories by five bestselling authors comes some all new novellas filled with alpha wolves and their mates, a demon who is the devils son, a Valkyrie and her two battle cat, and other supernatural creatures that’ll grab you from the start till the end.

The first story is book 3.5 in the Dante’s Circle series by Carrie Ann Ryan. You will fall in love with Fawkes and Leslie. Fawkes is the son of the Devil himself and must make a choice to be like his father, or leave the fiery depths of hell and hope he finds a woman. Leslie is a wolf who needs a strong man and Fawkes is more than enough. Miss Ryan knows how to mix suspense and danger, keeping you on the edge, while still giving us that hot sexy read. I love everything she’s ever written and this is no exception.

Marie Harte’s Beasts of Burden was one of the steamiest short stories I have read in a very long time. Erie is a Valkyrie and one of Freya’s battle-maidens and wants a mate, or mates, who were as tough as or tougher than herself. Hall and Avarr are battle cats whose sole job is pulling Freya around on a chariot, until one day she needed saving. Before the three can come together Hall and Avarr must admit they love each other and then they can make room for Eira. Marie Hart’s characters and scenes were so vividly described you can’t help but be drawn in and fall in love with the two battle cats and wish you were a fierce as Eira. This series is definitely one I can’t wait to read more of.

In Alpha Rising by Rebecca Royce Travis meets his mate Lilliana who has no clue she’s a wolf and almost loses her before he has the chance to tell her. Even when you think you know who the bad guy is you’re surprised by the turn of events and happy at the quick remedy. This novella has all the elements that make a great sweet short read, whilst still satisfying the readers need for more. Lilliana and Travis are the main characters, but you meet so many others that you hope each one will get a story of their own. Not to mention you will fall in love with an older woman named Matilda MayJ.

A Rebel’s Heart is part of the Ashwood Falls shifter series by Lia Davis that draws you in with a story of lost love and a woman willing to try again with the right man. Sarah Matthews lost her mate and true love and was ready to give up, until faced with her best friend Damian and a human with a gun trying to kill them both. I loved the danger and the way Miss Davis kept her heroine as tough as the alpha male. This story was truly about a woman who had lost her husband, her kids were grown and just when she was ready to give up, she was given another chance at life. It was so beautifully written, I can’t wait to read more.

Destined for Eden by Leia Shaw set in her Shadow’s of Destiny series was an absolute fun read that kept things fast paced and sexy. Eden and Dalton are the quintessential opposites attract. The chemistry literally jumped off the pages. This story had all the mixes of paranormal being perfectly blended making this a refreshing read that makes this stand apart from other paranormal stories.

This was one awesome anthology with some smoking hot stories. What really makes all these novellas absolutely wonderful reads are the strong alpha males and the equally strong women. Although these novellas are all part of series each author has, you can still read all these stories as stand-alones, but I highly recommend going back and reading EVERYTHING each of these talented authors have written.

Did you agree with our review? Let us know your thoughts in the comment box below!

All stories from this anthology sounds good 🙂

The anthology stories sound good, are any the start to a new series?

I’ve only read carrie ann ryan but the other stories seem like they might be good….however, I’m not a fan of anthologies…thanks

I have not heard about this anthology must go check it out-thanks for the review.