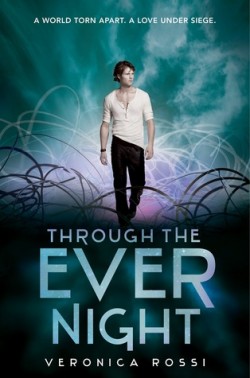 Through the Ever Night
by Veronica Rossi

“…won’t let you up until you’ve finished the last word, because you HAVE to know what happens next.” ~Under the Covers

This series does an amazing job at capturing the readers imagination and letting it fly right along with the story.  It’s a bit sci fi and a bit fantasy.  I would definitely recommend to anyone who enjoyed The Hunger Games and likes to be wowed by an author’s ability at world building.  Veronica Rossi showcases a world like I’ve never read before, but leaves me intrigued and engaged.

In this second installment of the Under the Never Sky, Aria goes in search of the Still Blue.  Some hearts might be broken and some lies will be told.  Betrayal and heartbreak await a lot of the characters.

Look for a lot of changes and growing up.  Perry is now the Blood Lord of the Tides and with that comes a big responsibility.  All his actions have consequences, and sometimes he has to learn the hard way.  He now has to put his people first.  Aria is more kick ass.  Changing from the more wilting flower girl we saw in the first book, she takes charge in this one.

And then there’s romance.  Perry and Aria are so perfect for each other it hurts to see them apart.  But they have a lot of growing to do and sometimes distance is the best.  I may have a bit of a crush on Perry just because he’s so awesome when he’s around Perry, but he also steps up to his responsibilities.  And speaking of romance then there’s Roar and Viv.  Brutal and heartbreaking.  Totally unexpected.

THROUGH THE EVER NIGHT takes us on a wild travel of enthralling worlds with some of the most amazing characters I’ve read in YA in a while.  None of the whiny teenagers that seem to dominate the genre.  It is action packed and won’t let you up until you’ve finished the last word, because you HAVE to know what happens next.

And now….what happens next?